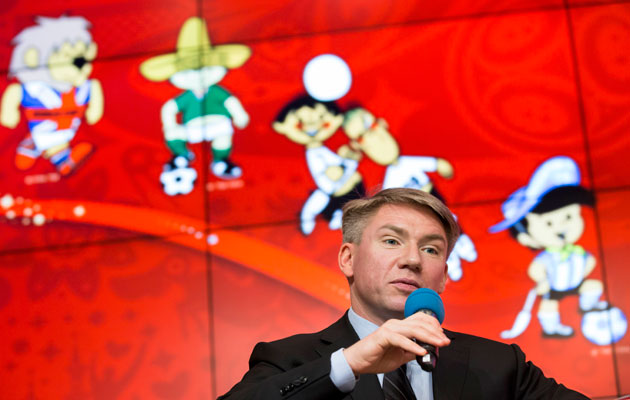 Alexei Sorokin, the head of the organising committee for the 2018 World Cup in Russia, has hit out at the investigations into FIFA and in particular calls for Russia to be stripped of the event.

Speaking at the World Football Forum in Moscow on Thursday, Sorokin said Russia had done nothing wrong and that the attacks on the country were politically motivated.

Asked about a report by the Spanish sports publication AS that FIFA had suggested taking the 2018 finals off Russia, Sorokin said it was “ridiculous”, adding that Russia was “very deep in the preparation process”

“We just need to ponder in whose interest it is to draw up the bridge between us and our partners in FIFA,” Sorokin said. “Strangely this comes when a sizable FIFA delegation is in Samara, where we’re trying to prepare the World Cup together.”

Although the FBI said last week it was extending its investigation to include the bidding process for the 2018 and 2022 World Cups, Sorokin said neither Swiss nor American investigators have been in touch with Russia.

“We do hear various urges and calls for a boycott, and it’s very disappointing,” he said. “As I have said, the direct victims of these urges are athletes preparing for four years and the fans looking forward to come to Russia and have a good experience, maybe the experience of a lifetime. Very seldom do we hear such urges from the football community. It’s done for politicians, and it’s very sad.”

Although he admitted “there was some criticism” about the 2018 and 2022 World Cup selection process, he said this was an issue FIFA has to deal with on its own.

“It’s not necessary to put yourselves into some sort of hysteria or trance about all this,” he added. “The organisation has the capability to self-regulate and possibly fix incorrect decisions made in the past. The participation of law enforcement organs isn’t necessary.

“As far as the investigations go, that’s a different issue. Fifa handles billions of dollars. Naturally, there can be abuses in some places. FIFA isn’t an audit chamber or a prosecutor. It can’t keep track of every kopeck but FIFA does have a system to control expenditures.”

Sorokin said Russia was “puzzled” by the investigations into the World Cup bidding process, arguing that Russia presented a “good, transparent bid”.

Asked whether Russia would take legal action against FIFA if it was stripped of the 2018 World Cup, Sorokin said he did not speculate about what might happen.

“These efforts are unifying the Russian government and all the regional leaderships and the organising committee, and in our work we don’t even want to think about them taking the [World Cup] away from someone. There’s no basis for that,” he said.