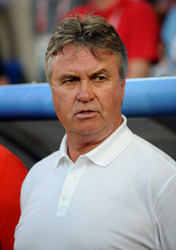 Tony Adams has been told to clear his desk at Fratton Park, but who will take over? Avram Grant is the early favourite. See all the runners and BestPrice betting here.

Guus Hiddink’s agent says his client is prepared to talk to Chelsea owner Roman Abramovich, but would snub any approach to take over as manager at Stamford Bridge.

Hiddink has been linked with the job in the past and already has a relationship with Chelsea owner Abramovich via his current role as Russia coach.

“I think because of the personal relationship he has with Mr Abramovich he will definitely talk to him and listen to him but I think Mr Abramovich realises he also he has not finished his job (with Russia),” his agent Cees van Nieuwenhuizen said.

“He is focused on his job with Russia, he is with the team on a training camp in Turkey and he has only one goal in his mind which qualifying for the World Cup in South Africa.”

Asked whether he would listen favourably to an approach from Abramovich to take charge at Stamford Bridge, van Nieuwenhuizen said: “As far as I know – and I have known Guus for a number of years now – he can say no to everybody.

“I know Guus and Abramovich know each other pretty well and have lots of conversations about football but I think he will respect Guus when he says ‘I want to finish what I’ve started’.

“For myself I can say definitely (that Hiddink would reject Chelsea). He is happy working with the national team in Turkey and is having a lot of fun there. He wants to be in South Africa and make another miracle in another World Cup.”

“Right now I am preparing for dinner with the squad and don’t want to think about where or what people are saying about me or what the bookmakers believe,” he said.

“I’ve heard about Scolari’s departure, but there have been no calls from Chelsea. And as you know, I never comment on rumours – it serves no point or purpose.”

The president of the Russian Football Association, Vitaly Mutko, added: “Guus Hiddink has a valid contract that expires in 2010 and I have no doubt that he will see it through.”

Tony Adams has been told to clear his desk at Fratton Park, but who will take over? Avram Grant is the early favourite. See all the runners and BestPrice betting here.