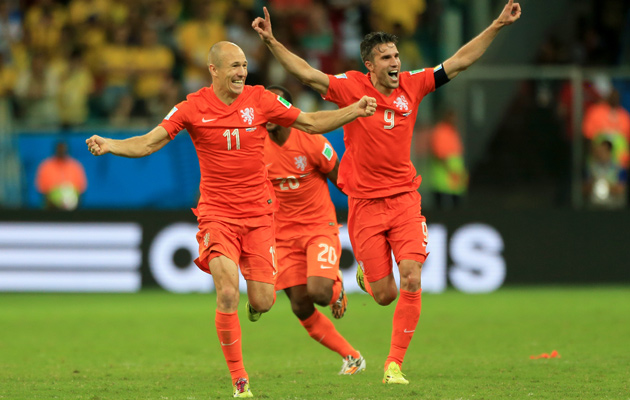 Holland had fielded a more attacking formation than in their second-round victory over Mexico. Memphis Depay started as a third forward alongside Robin Van Persie and Arjen Robben but Costa Rica’s defensive 4-5-1 formation ensured few opportunities of note in the first half. The best chance of the half fell to Robben, whose free-kick was well saved by Costa Rica keeper Kaylor Navas, who had another excellent game.

The stalemate continued in the second half. Costa Rica grew in confidence and had claims for a penalty when Joel Campbell was shoved off the ball by Bruno Martins Indi. But Holland continued to threaten through Robben as they searched for the winning goal. Navas produced another outstanding save to deny Van Persie and then Wesley Sneijder curled a brilliant free-kick against the inside of a post with 10 minutes of normal time remaining.

Costa Rica defended with great spirit and their goal led a charmed life at times. Van Persie had a glorious chance to settle the match in normal time, but he inexplicably fluffed his shot, completely missing a cross that had been beautifully teed up by Sneijder. Then Van Persie’s shot was cleared off the line by Yetlsin Tejeda in injury time.

Costa Rica continued to defend for their lives in extra time as a repeat of their second-round penalty shootout with Greece loomed. They had a strong claim for a penalty when Ron Vlaar backed into substitute Jose Cubero. Both sides had chances in the final few minutes of extra time. Costa Rica substitute Marcos Urena was denied by Holland keeper Jasper Cliessen and then Sneijder hit the bar in the final minute of the match.

Man of the match: Arjen Robben. Despite Holland’s failure to score over 120 minutes, the Bayern Munich winger was a constant source of trouble to Costa Rica’s defence.

Talking point: In Holland’s previous matches, coach Louis Van Gaal had made tactical switches and substitutions which helped to swing things in his team’s favour. But the introduction of an extra forward failed to work in regulation time, as Costa Rica defended with incredible spirit. Van Gaal did not use his second sub, Klaas-Jan Huntelaar, until the second half of extra time, while he waited until the end of extra time before introducing his final sub, keeper Tim Krul.