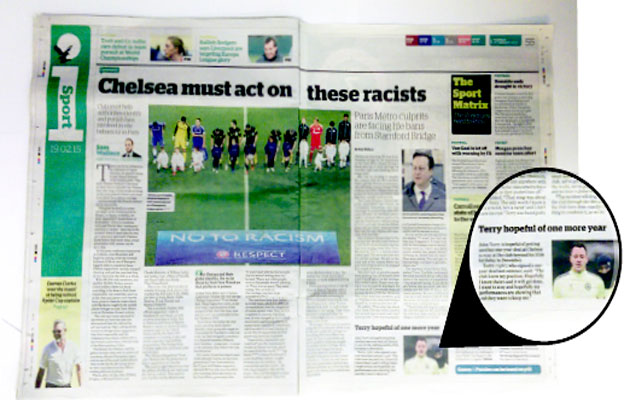 Chelsea, as befits a club with a global multiracial following, have issued a statement condemning the actions of the supporters who sang a racist song and prevented a black man from boarding the train carriage.

And yet, while John Terry remains the club’s captain and standard bearer, the sincerity of the club’s commitment to the anti-racism cause remains open to question.

“Such behaviour is abhorrent and has no place in football or society,” read the statement. “We will support any criminal action against those involved, and should evidence point to involvement of Chelsea season-ticket holders or members the club will take the strongest possible action against them, including banning orders.”

Just so long as none of them turn out to be the club captain.

Terry was given a four-match ban and fined £220,000 after being found guilty of racially abusing Queens Park Rangers defender Anton Ferdinand. 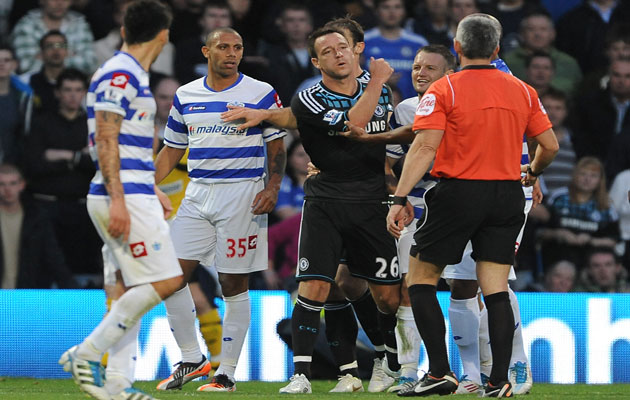 After the hearing, there was no condemnation for Terry, merely an acknowledgement that the Chelsea captain still had the option of appealing against the guilty verdict.

The club issued a statement: “Chelsea Football Club notes and respects today’s decision by the Football Association regarding John Terry. We also recognise that John has the right to appeal that decision.

“It is therefore inappropriate for us to comment further on the matter at this time.”

In the event, Terry, probably wisely, given that his defence was described by the Independent Regulatory Commission as “improbable, implausible and contrived”, chose not to appeal.

Chelsea condoned Terry’s decision, and spoke approvingly of him apologising for the language he had used. There was no suggestion that he should be stripped of the club captaincy.

At the time, the club said: “Chelsea Football Club believes John Terry has made the correct decision by not appealing against the FA judgment relating to language he used at the QPR match last October.

“Chelsea also appreciates, and supports, John’s full apology for the language he used. The club firmly believes such language is not acceptable and fell below the standards expected of John as a Chelsea player.

“The board has conducted its own investigation into the matter and considered the various issues involved.

“Chelsea enjoys support all over the world. We have players and supporters from many different countries and cultures and our club is committed to eradicating all forms of discriminatory behaviour. John is fully committed to continue supporting that.”

Hardly the words of an institution which finds such behaviour “abhorrent”.