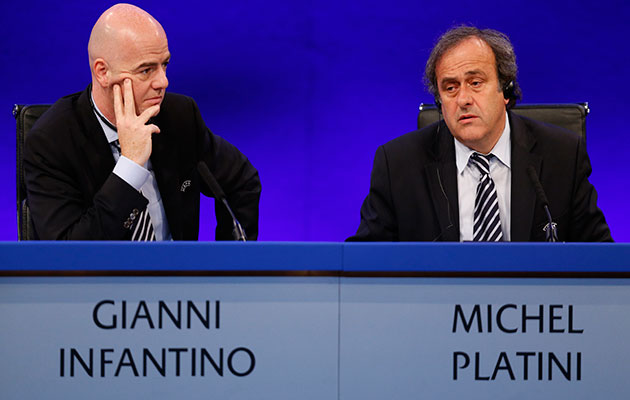 Gianni Infantino has wasted no time distancing himself from his old boss Michel Platini, certainly as far as technology in football is concerned.

Only reluctantly, last year, did he concede consideration of the use of goal-line technology at Euro 2016. But he had to be dragged, kicking and screaming, to that point along a road upon which Infantino had been a loyal, non-disssenting general secretary.

However Infantino goes to Cardiff later this week for his FIFA presidential debut at the lawmaking International Board’s annual meeting with an expressed will to endorse approval for the testing of video assistance.

Infantino made plain his shift away from the French Luddite while using an in-house interview with FIFA’s website to set out the footballing priorities of his three-year reign up until the next presidential election in May 2019.

IFAB comprises a representative from each of the four British home associations with FIFA also commanding four votes. A three-quarters majority is needed and it will be major shock if Cardiff’s gathering on Saturday does not endorse a proposal from IFAB’s general meeting in January to launch a competitions test programme.

Infantino said: “We are in 2016 so we cannot close our eyes any more to technology. Goal-line technology is already a reality so we need to look into this matter and make real-life tests.

“It’s doesn’t stop like other sports. In football you have a flow and a referee who takes important decisions. We need to see what kind of impact technology will have and if the flow of the game is guaranteed . . . so we need to start with serious tests sooner rather than later.”

Picking up other themes Infantino repeated his determination to increase women’s participation in the game worldwide at all levels, involve players in both promotional and decision-making spheres as well as increasing the number of World Cup slots to 40 – and perhaps increase the numbers involved in the youth and women’s tournaments.

He said: “I believe in an increase in number of teams at the World Cup to 40 teams – eight more teams. We will not only give eight more countries the possibility to participate but give many more the dream to participate, to play the qualifiers in a very solid way.

“This will boost the development of football as well as its popularity in many countries.”

Infantino shrugged off European club criticism that expanding the World Cup would unbalance the international calendar.

Turning to the ‘other World Cups’ he added: “The youth competitions are critically important and it’s important to think whether we are still in the right age categories or whether we need to change something and go a bit younger.

“Also we need to see whether it is good to increase the size of these final tournaments or make sure, locally, how we play international competitions with the help of FIFA.

“Some countries will never even dream of participating in any of the world cups at any age but they all need to play competitions so we need to help to organise competitions at local level. Then their ‘World Cup victory’ will be maybe the winning of a local tournament. FIFA has to be there to help to do this because competitions are the basis of all we do.”

In terms of development Infantino picked up a theme expounded by several of the rival candidates for the FIFA presidential election that support needed to be targeted more effectively.

He said: “I’ve been travelling a lot and I’ve seen with my eyes what the needs are. But what we have to do more particularly is to invest in tailor-made programmes for each country because the needs are not the same in Bhutan or in Madagascar or Switzerland or Paraguay.

“The needs are completely different.

“We have to make sure we target each of the 209 FIFA member associations and help them develop football in accordance with the needs they have and this will make a big difference in football development all over the world.”