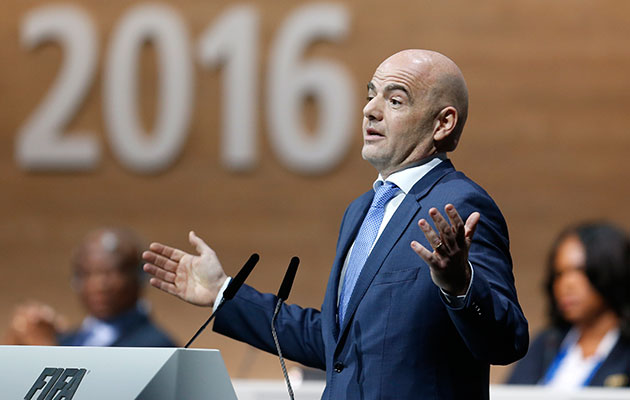 Gianni Infantino has been thrown into world sport’s lion’s den on taking over the presidency of scandal-scarred, corruption-encrusted international football federation FIFA.

Infantino won a tense election at today’s extraordinary congress in the second round of voting. Needing a simple majority of the 104 from among the 207 eligible votes he polled 115, some 19 more than Sheikh Salman (88). Seeven votes went to Jordan’s Prince Ali and none for Jerome Champagne.

A second round of voting had been necessary after no candidate obtained the essential two-thirds majority in the first round. Voting totals were: Infantino 88, Sheikh Salman 85, Prince Ali 27 and Champagne seven.

Infantino, who must lead the structural reorganisation demanded by the earlier approval of comprehensive reforms, is the ninth president in FIFA’s history and the second successive Swiss.

The task ahead is enormous. He has three years three momths, up until the next scheduled eletion in 2019, to repair FIFA’s battered image and virtually non-existent credibility.

There is also the small matter of persuading sponsors and the judicial authorities of both the United States and Switzerland that the ‘owner’ of the world’s most popular sport is on the right track back to economic and political sanity.

FIFA’s second election in nine months had been enforced after Sepp Blatter, who had led the body since 1998, decided to step down within four days of being re-elected in May last year.

Blatter, who had survived so many other crises, reeled off stage under the weight of scandal. The final crushing blow was a $200m FIFAGate corruption investigation by the United States authorities and which saw the arrests and indictments of 41 individuals and corporations.

Michel Platini, French president of European governing body UEFA, had been the initial favourite to succeed Blatter, his original mentor in the ways of FIFA.

His hopes collapsed after he and Blatter were suspended over the infamous ‘disloyal payment’ of SFr2m. Both men, despite denying wrongdoing, were subsequently suspended by the FIFA ethics committee for eight years (reduced on appeal this week to six years) for financial misconduct in office.

Platini’s humiliating exit led Sheikh Salman – originally a Platini supporter – to throw his own hat into the ring while UEFA chose to put forward Infantino, its general secretary, as a Plan B.

Last year UEFA has supported Prince Ali who duly took a surprisingly high 73 votes off Blatter but was stranded this time around after UEFA switched support to its own man.

All five candidates had been afforded 15 minutes each to address delegates from FIFA’s 209 national associations.

Prince Ali raised his game after a lacklustre address last year but Infantino was the only one of the ‘top three’ to earn an unscripted round of applause after pointing out to delegates that FIFA’s money was “your money.”