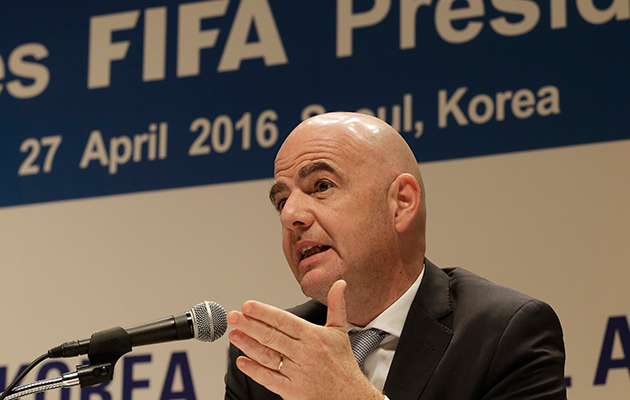 FIFA President Gianni Infantino has hinted at offering more World Cup places to Asia during a visit to Seoul on Wednesday as part of his pre-election pledge to increase the number of finalists to 40 teams.

Infantino was visiting South Korea with a view to rebuilding trust with commercial partners and presenting his vision of a ‘new FIFA’, in the wake of what has been a scandal-hit 12 months for football’s governing body.

Fifa remains mired in the worst crisis in its 112-year history, with more than 40 individuals, including many former FIFA officials, charged with corruption-related offences in the United States.

Infantino, elected in February to replace the disgraced Sepp Blatter, told reporters that adding eight more teams to the World Cup from 2026 was “perfectly justified”.

“Football is not only Europe and South America. Football is the world,” he said.

“I’m not a dictator so I can’t impose anything but I’m trying to convince everyone. I believe we have to increase the number of teams… because we have to be more inclusive.”

Asia is currently guaranteed four automatic spots at the World Cup, with a fifth available via an inter-confederation play-off, and Infantino said that number could rise to at least six if the tournament expanded to 40 teams.

As a result of the recent turmoil affecting the organisation, FIFA has struggled to find sponsors and Asia is regarded as fertile ground for new commercial partners.

In his bid to atract potential sponsors in the region, Infantino spoke optimistically about a new mood within Fifa and insisted the organisation had put its past problems behind it.

“FIFA went through a difficult time… but times have changed,” he added. “This is a new FIFA.”