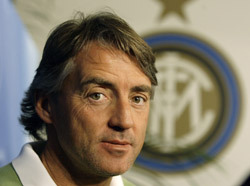 Plenty more International Friendlies over the next few days as the teams heading to Euro 2008 get their final games in. Click here for the full list & Best Price betting.

Internazionale have ended weeks of speculation about the future of Roberto Mancini, by sacking the Scudetto-winning coach.

Despite leading Inter to three successive Serie A titles, Mancini’s future had been in doubt since March, when, after the club’s Champions League defeat to Liverpool, he said he would quit the club at the end of the season. He subsequently changed his mind, but Inter said the 43-year-old was dismissed because of his comments after the Liverpool game.

Mancini’s departure increases speculation that the Italian could become the next manager at Chelsea following the departure of Avram Grant on Saturday.

Former Chelsea boss Jose Mourinho has been linked with the Inter coaching job and the Portuguese is the firm favourite to replace Mancini.

Club president Massimo Moratti and Mancini had met on Tuesday, but the club did not reveal their decision until 48 hours later.

“FC Internazionale have informed Roberto Mancini that he has been sacked as coach,” said the Inter statement.

“In particular because of the comments made by the coach at the end of the Inter-Liverpool match.”

Mancini joined Inter in 2004 and as well as those three Serie A titles he also guided the club to successive Italian Cup victories in 2005 and 2006.

Plenty more International Friendlies over the next few days as the teams heading to Euro 2008 get their final games in. Click here for the full list & Best Price betting.