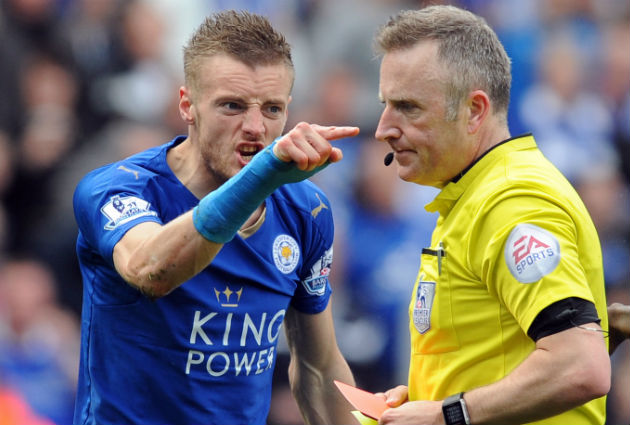 Leicester City striker Jamie Vardy has been banned for an additional game after being cited for improper conduct, The FA confirmed.

Vardy was sent off by referee Jon Moss during his team’s game with West Ham for two bookable offences. He received a second bookable for simulation, which infuriated the striker and he exchanged strong words with Moss.

Consequently, Vardy has been banned for a further match this weekend against Manchester Utd. This match could prove to be vital for Leicester – should they defeat Utd, they will be crowned Premier League champions.

“Following an Independent Regulatory Commission hearing, Jamie Vardy has been given a one-match suspension with immediate effect, fined £10,000 and warned as to his future conduct.”The Leicester City forward had accepted an FA charge of improper conduct following his second half dismissal against West Ham United on Sunday 17 April 2016.

“Meanwhile, the club has been fined £20,000 after admitting an FA charge of failing to ensure its players conducted themselves in an orderly fashion.

“The standard penalty, which the club accepted, followed an 83rd minute incident during the same fixture.”