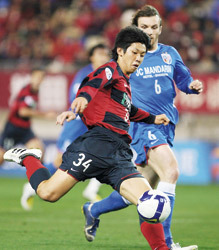 Yuya Osako is a name we are not allowed to mention at the moment. Kashima Antlers manager Oswaldo Oliveira is very strict about this, insisting his teenage striker still has a long way to go and needs to be protected from the media spotlight. Trouble is, it’s getting hard.

Osako, who joined Antlers straight from high school this spring, has already scored three times in the Asian Champions League and netted his first J.League goal in the 2-1 win at Tokyo that sent Antlers to the top of the table for the first time this season.

J.League chairman Kenji Onitake set the tone at the curtain-raiser Super Cup match against Gamba Osaka in February when his post-match comments boiled down to his regret at not having seen more of Osako, who appeared late in the game, because he wanted to know if the youngster was the real deal. The early answer is a qualified, but generally optimistic, yes.

It is tough on Osako, who turned 19 in May, but the fact is Japan has been looking for an all-round, goalscoring striker for a very long time. Just about every year the media spotlights another young hopeful, and just as regularly the attention fizzles out as the innocent candidate fails to produce at club level.

Not that Japan don’t score. As national team coach Takeshi Okada complained when the old question was raised again after the 1-0 World Cup qualifying win against Bahrain: “We aren’t a team that can’t score? We have scored more goals than anyone else in the group.”
It’s just that there’s always the nagging feeling that, with so much possession, they could perhaps score more. The big worry is whether they will score at all playing like this against stronger opponents in South Africa.

What they need, in effect, is a tall, lithe, quick striker who is useful in the air, passes well, has good vision, can dribble, is able to turn his man and does not hesitate to shoot on sight. Someone like Osako, in fact.

He was kept on the bench for the first league game of the season, came on in the second, then started four league matches in a row before dropping back to the bench again for the first 70 minutes of Antlers’ seventh game, at Montedio Yamagata.

To put that in perspective, he is playing for the team that has won the J.League two years running, alongside Marquinhos, the league’s top scorer last season, and being alternated with 22-year-old Shinzo Koroki, another promising striker, who broke into the national team last October.

“I want to rotate them, paying attention to how tired they are and encouraging them to compete with each other,” says Oliveira.

Total disrespect
Osako is not the only teenager in the spotlight. Urawa Reds manager Volker Finke has been using two of them since the start of the campaign – Genki Haraguchi, who turned 18 in May, and Naoki Yamada, who will be 19 in June.

Haraguchi, who has represented Japan at every age level from under-12, started as an attacking midfielder in the first game of the season, at Antlers, and immediately impressed with his speed, deftness and total disrespect for the champions. Antlers may have won the game, but Reds have remained unbeaten since.

By the time they overtook Antlers to go top for the first time since last August, Haraguchi was lining up alongside Edmilson in attack, ahead of World Cup striker Naohiro Takahara. Yamada, a prolific scorer himself in his Reds youth team days, had come in as a key creator in midfield.

Finke is just as protective of his youngsters. After the 1-0 win at JEF United Chiba, when Reds went top, Finke criticised the media for suggesting they might be ready to step straight up into the national team.

“I have worked a lot with young players in Germany,” he said. “And my experience tells me they have to be treated extremely carefully. It’s important they find a firm footing and make progress steadily. It isn’t good to start talking too early about the national team or the next World Cup.”

Japanese players do start later because they stay in school longer, and Oliveira and Finke are right to insist their young protégés still have a long way to go – but it has been a long time since Japan’s new crop has looked as good as this. l