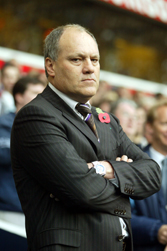 Another full set of Premiership fixtures this weekend including Arsenal v Man Utd & Blackburn v Liverpool. Click here for all the games & betting.

Martin Jol has blamed the Tottenham’s transfer policy for the club’s current plight and for his own departure.

Speaking publicly for the first time since his dismissal last week, Jol claims that his position was undermined by Tottenham’s director of football, Damien Comolli, signing players he didn’t want.

Jol said he wanted to bring in two experienced players in the summer, including a left-winger, and was unhappy with the purchases made by Comolli. He was presented with signings which included Darren Bent, Younes Kaboul and Kevin-Prince Boateng.

“I felt the squad would be unbalanced with these signings and it proved to be the case,” Jol said. “The funny thing is the new manager will probably come to the same conclusion and the club will go out in January and buy the two players I felt we needed.”

Jol said he felt the club were putting future profit ahead of much-needed team building requirements.

“When Frank Arnesen was director of football we spoke together about the players to bring to the club,” he said.

“But I did not have the same relationship with the next man. I think the club wanted to invest in younger players because they wanted to make money on them in the future. The decisions were not being made for football reasons. I knew that in the summer and realised my position was becoming very difficult.”

Jol has been replaced at Spurs by Juande Ramos but may not be out of work for long. PSV, the Dutch champions, have confirmed he is a candidate for the coach’s role left vacant by the departure of Ronald Koeman to Valencia.

Another full set of Premiership fixtures this weekend including Arsenal v Man Utd & Blackburn v Liverpool. Click here for all the games & betting.