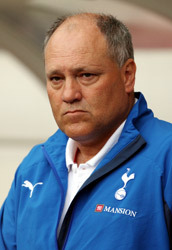 You have to go back to 2000 (7 games) to find the last time Man City lost at home to Newcastle. Click here for the latest betting!

Martin Jol has gone on the offensive in his bid to remain in charge at Tottenham.

With Spurs languishing third from bottom of the Premier League, Jol faces an uphill struggle to persuade the board that he is the man for the job.

“The fans know how difficult it is if they change management again, they know you could easily go back for years,” Jol said on Thursday.

“I hope people are realistic – you can get anyone in the world to come, but to do better you must finish fourth.”

Spurs have been forced to deny press reports that club chairman Daniel Levy had already agreed a pay-off with Jol.

“The speculation isn’t a nice position to be in, but I can’t do anything about it,” Jol told BBC Radio.

“We were fifth two years in-a-row, I don’t think anybody else could do any better. The continuity of the club is important and we did that here with my staff over the last couple of years.

“We won a lot of points, had nine wins in Europe and got back into Europe via the league, which probably didn’t happen for 25 years or so.

“So the fans realise and they appreciate my work and that is a good feeling.”

You have to go back to 2000 (7 games) to find the last time Man City lost at home to Newcastle. Click here for the latest betting!