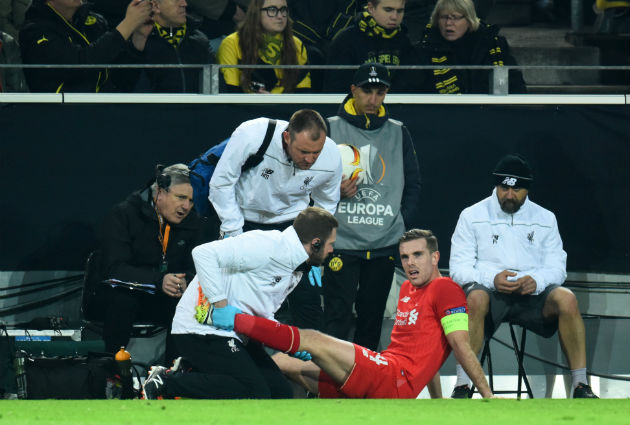 Jordan Henderson will undergo a scan on his knee after he suffered the injury during Liverpool’s 1-1 draw with Borussia Dortmund last night.

Liverpool captain, Henderson picked up the injury during the opening 45 minutes of the Europa League and subsequently, he was replaced by Joe Allen at half-time.

Manager Jurgen Klopp was concerned for his captain and believes that the injury is worse than first feared.

“It’s really frustrating because each team in the world needs a little bit of luck and again it looks we don’t have [this]. It’s a knee issue in this moment,” Klopp told Liverpool’s official website.

“Until we have the scan we hope for everything, but it doesn’t look too good.

“I don’t want to speculate [on what it is] because what can I say until we have the scan? It is not a small thing, I think, that’s what we can say.

“We have to wait for the result of the scan.”

Liverpool will go into the reverse fixture full of confidence. Divock Origi gave Liverpool the lead going into the first half, however their lead was short-lived after a Matt Hummels header reduced the deficit for Dortmund three minutes after half-time.