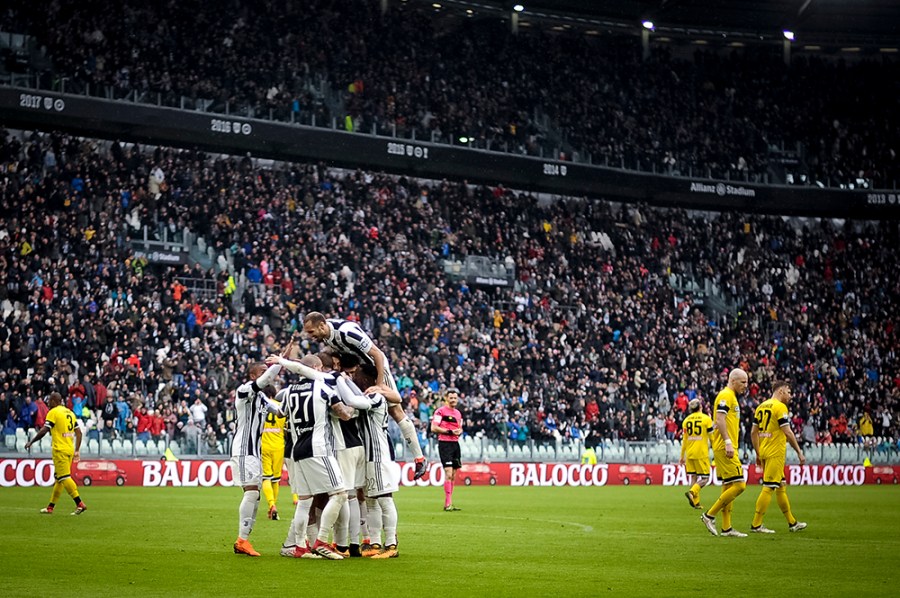 So, will this be the week when Juventus, to all intents and purposes, wrap up a seventh consecutive league title?  As is so often the way with the Old Lady in the month of March, she has been looking decisively menacing of late.

The efficiency with which the Argentinians Gonzalo Higuain and Paulo Dybala saw off Tottenham Hotspur in their Champions League clash last week was splendidly repeated last Sunday. This time, the pair were key players (Dybala scored both goals) in a 2-0 defeat of Udinese 2-0 in Turin, a win that put Juventus on top of the table for effectively the first time this season.

At this point, it is hard to resist the sensation that the Turin club has yet again timed its season perfectly to ensure top form in the crucial months of March and April. However, as they prepare for the final run-off against their only remaining Serie A rivals, Napoli of course, the Old Lady has already received an unexpected, potentially all decisive helping hand.

That came 10 days ago when, in one of the only three games played on a weekend when Italian football stopped to mark the death of Fiorentina captain, Davide Astori, Roma did Juventus the immense favour of beating Napoli 4-2 at the San Paolo. On that same night, Juve had done themselves a huge favour by beating Lazio 1-0 with the last kick of the match from, who else, Paulo Dybala.

Until 10 days ago, most of us had expected that the decisive moment in this tussle would come on April 22nd next when Juventus entertain Napoli at the Juventus stadium. The Juve camp had marked that day down as the day of the “sorpasso” (overtaking), the day when a home win against Napoli would see them a long way down the road to yet another title success. Roma’s win over Napoli, followed by Sunday night’s 0-0 draw between Inter and Napoli, has changed all that, leaving Juventus  one point clear at the top, what is more with a game in hand.

On Wednesday, Juventus are at home to Atalanta for the rescheduling of a game that was abandoned two weeks ago, due to heavy snowfall up in Turin. By Wednesday night, Juventus could be four points clear at the top of the table, leaving Napoli with a seeming mountain to climb. After all, Napoli will doubtless recall the last occasion, two seasons ago in February 2016, when they travelled to Turin as league leaders, only to go down 1-0 beaten by a late goal from Simone Zaza. That defeat marked the end of title contest.

By Wednesday night, it could be that Juventus will hold all the aces in view of the April 22nd decider. It may well no longer be the title decider.

Last week’s 2-1 win against Tottenham Hotspur reminded us of a couple of sacrosanct  truths. Firstly, Juventus are by far the strongest side in current Italian football, the only Serie A team truly capable of competing with the very best in Europe. Secondly, when it comes to efficient, cynical and experienced football, few teams do it better than Juventus.

After all, at Wembley last week, Juventus won a game in which they had enjoyed only three minutes of total superiority. Argentinian class, Juventus experience and a cobra-like sense of the kill pulled off a minor masterpiece. At this stage, it is looking ominous for Juve’s Italian rivals – Napoli in the league and Milan in the Italian Cup final (probably on May 9th). And then too, there is the small matter of a Champions League, quarter final tie.

Talking to the media prior to Sunday’s 2-0 defeat of Udinese, coach Massimiliano Allegri summed up the current situation, acknowledging that involvement on all three fronts inevitably poses huge physical problems.  Furthermore, in typical Juventus fashion, Allegri was keen to remind people that the club has won “nothing yet”, saying: “We used up huge physical and mental energies in London (on Wednesday night).  It is an extraordinary result to get to [another] Champions League quarter final tie but we have done nothing yet. For a start we are still chasing Napoli in the league [no longer!], for a second we still have to play AC Milan in the Italian Cup final and, as for the Champions League, well the road to Kiev is still long and winding…”

Allegri’s qualified caution is understandable but, truth to tell, he knows as well as we do that the Old Lady is in an enviable situation.  By late on Wednesday night, that situation may be even more enviable.