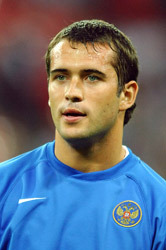 Euro 2008 qualifiers over the next week. Click here for the BestPrice coupon for all games including Scotland v Italy & England v Croatia.

Russia’s Alexander Kerzhakov claims England will not qualify for Euro 2008 because excessive wealth has made their players lazy.

Kerzhakov believes Russia work harder during games and deserve a place in next summer’s finals at the expense of England.

“England have a team of big stars who earn an awful lot of money from playing with their private deals,” he said.

“Russia have a compact group of players who don’t have anywhere near as much money, but with far more hard workers on the field. That’s the difference between the countries.

“That’s why we are in a strong position and England have been left just hoping.”

If Russia beat Israel on Saturday, England face almost certain elimination from the qualification race for the finals.

Kerzhakov added: “I understand that the Euro 2008 finals without players like Steven Gerrard, Michael Owen and Wayne Rooney would be strange, but England have not performed on the field and Russia have more points, so that is how it should be.

“It isn’t always the superstars who win football matches. We deserve to be in the finals because we’ve lost only once and that sums up our consistency.”

“Against England, we played without fear. The same can’t be said of England,” he said.

Euro 2008 qualifiers over the next week. Click here for the BestPrice coupon for all games including Scotland v Italy & England v Croatia.