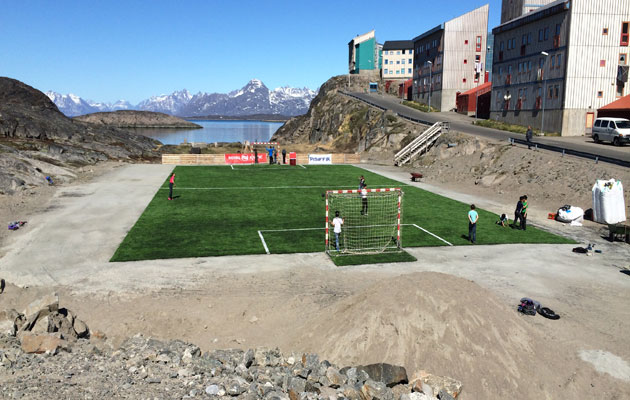 After years of trying by the locals (but no help from FIFA), Greenland is to finally get a full-size artificial pitch.

Greenland is the largest island in the world and football the most popular sport. More than 10% of the circa 56,000 population play regularly, but the the harsh winters mean that all the pitches are sand and stone. No players can wear shorts and the prohibitive cost of a full-size artificial pitch is beyond the local national association, the GBU.

Greenland has self-government but has been denied membership (and direct financial help) from FIFA, although the Danish association did secure funding from FIFA’s Goal programme to lay a pitch in Qaqortoq a number of years ago.

The pitch at Qaqortoq is only 35m by 65m. Another pitch has been laid after former national coach Tønnes Berthelsen managed to raise 300,000 Danish Kronar (about €40,000) but the surface at Maniitsoq (pictured) is only 20m by 41m.

A proposal was put to the island’s government some years ago for funding a full-size pitch. That did not materialise but a full-size pitch is finally on the horizon. Berthelsen says: “In [the capital] Nuuk we are planning to establish a pitch of 40 x 65 meters from June this year. It will be financed by fisheries company Polar Seafood. In Qeqertarsuaq a private donor has sponsored a full size artificial pitch. It is expected to be constructed this year.”

Too late to help Greenland prepare for their appearance at the football competition at this year’s Island Games in Jersey but progress all the same and without FIFA. Another sign that football can both survive and flourish without the increasingly beleaguered world body.

Steve is a regular contributor to World Soccer. You can read more of his material here.