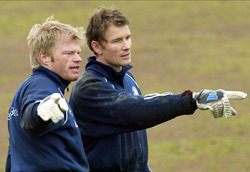 Arsenal goalkeeper Jens Lehmann has dismised reports linking him with a move to Hertha Berlin.

Lehmann’s future at Arsenal remains uncertain as his current contract expires at the end of the season, but he has yet to agree to a new deal.

Arsenal are only prepared to offer him a one-year extension, but the German international is thought to be holding out for a longer deal .

According to reports in Germany Hertha Berlin could be ready to meet Lehmann’s demands for a long-term deal.

However, Lehmann has denied reports that held talks with Hertha about a possible move to the German capital.

“I have not spoken to anybody in Berlin, I can promise you that,” Lehmann told Kicker.