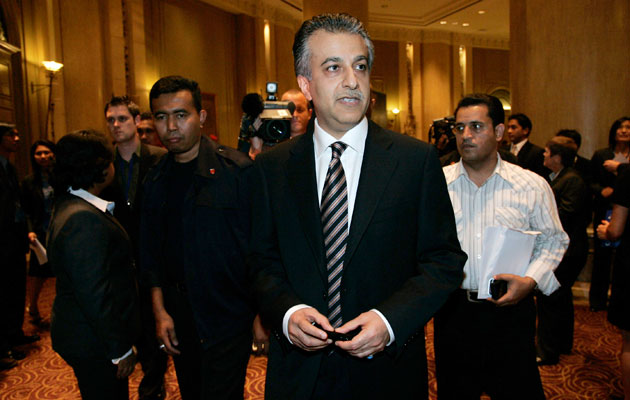 The Bahrain Institute for Rights and Democracy (BIRD) has written to FIFA’s eight leading sponsors expressing their concerns regarding Sheikh Salman Al Khalifa’s bid for the FIFA presidency.

Sheikh Salman, current Asia Football Confederation president and member of the Bahrain royal family, has come under scrutiny for his role in suppressing the 2011 popular uprising in Bahrain.

The Letter to FIFA sponsors Coca-cola, McDonalds, Visa, Adidas, Budweiser, Gazprom, Hyundai and KIA claimed that Sheikh Salman, as Bahrain FA president in 2011, was involved in the detention and torture of footballers.

According to the letter, Sheikh Salman was appointed to head a committee which identified and punished players who participated in protests against the ruling regime in February and March that year.

A week later, Sheikh Salman oversaw a Bahrain FA meeting, which relegated and fined six football clubs, which had previously requested a suspension of all football activities after a brutal police crackdown on protesters.

According to an official press release at the time, Sheikh Salman’s Bahrain FA “highlighted the importance of abiding by the decisions of the Investigative Committee, which concern whomever has recently offended our leaders and precious kingdom, and the importance of excluding whomever is proven to have participated in these offensive acts, including administrators, referees and committee members of the Bahrain FA.”

Sheikh Salman has previously denied that the Investigative Committee ever met or took any decisions.

BIRD also state that players have alleged they were tortured in that time. Alaa Hubail, Bahrain national team striker, was arrested during martial law in 2011, and provided a detailed description of torture in detention to ESPN journalists. Sheikh Salman has always denied that any athletes were tortured, despite Hubail’s account.

Sayed Ahmed Alwadaei, Director of Advocacy, BIRD, said: “We hope FIFA’s sponsors consider our letter very seriously and respond immediately and appropriately. Sheikh Salman led the politicised punishment of clubs and denies the torture Bahraini players underwent. Coca-cola have called for an accountable FIFA. What happened in Bahrain was a black mark on its history, and Sheikh Salman must be held accountable for the part he played.“

* Update added January 26, 2016: Sheikh Salmans’s lawyers Schillings have contacted World Soccer and asked we include the following paragraph, which we have acceded to by way of a right of reply.

“The allegations are entirely false and categorically denied by Sheikh Salman bin Ebrahim Al Khalifa. While it was proposed that Sheikh Salman lead a fact- finding committee in relation to the events of 2011, that committee was never formally established and never conducted any business whatsoever. For the record, and in light of the recycling of historic allegations in the media, Sheikh Salman had absolutely no involvement in the identification, “politicised punishment”, detention or mistreatment of any individuals as has been alleged.”

For more information on the reports, which Sheikh Salman denies, see here.