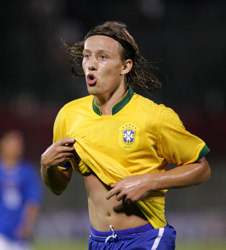 Leiva, 20, was unveiled after signing from Gremio for a fee believed to be in the region of £5m.

Leiva told the club’s website: “I am very happy to be at Liverpool. It is a club respected throughout the world.

“There is a great selection of top stars at this club and it is a fantastic opportunity for me.”

“Lucas is a young player with great experience,” said Benitez. “We have known about him for a long time and had to move quickly to sign him because many top clubs were interested.

“Lucas is not a typical Brazilian player but he’s a clever player who wants the ball all the time, which is important.

“He will need time but I think we’ve signed a really excellent prospect.”

Liverpool captain Steven Gerrard has also predicted a big future for the captain of Brazil’s Under-20 side.

Gerrard said: “From what I’ve seen of him so far he’s got everything you need in a Liverpool player; good touch, good passing and he’s also a good lad off the field.

“I expect him to be knocking on the door of the first team before too long and hopefully, in time, he can help us win many trophies.”