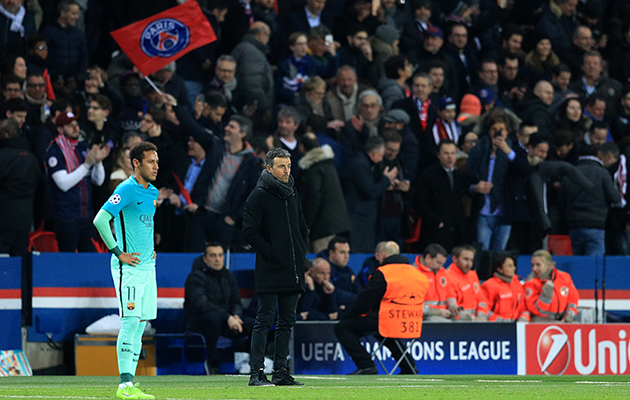 Luis Enrique reportedly had to be restrained from confronting a reporter following Barcelona’s 4-0 Champions League defeat against Paris Saint-Germain on Tuesday.

Speaking to TV3 after the game, the Barca coach said to reporter Jordi Grau: “I don’t like your tone and I would have liked the same treatment all the times we have won that I am getting tonight when we haven’t.”

As the Barca manager started to walk away, Grau concluded by saying: “[Luis Enrique] seems to be very upset, but we can’t understand what he means when he talks about our treatment since in victory, almost always, and when the team loses, our treatment toward him has been consistent.”

It was at this point, according to reports in Spain, that Luis Enrique had to be restrained from physically confronting Grau.

Prior to this confrontation, Luis Enrique admitted his side now needed a “heroic performance” to stand any chance of overturning the four-goal deficit.

Angel Di Maria scored twice, while Julian Draxler and Edinson Cavani were also on target in a wonderful PSG performance.

“It is difficult,” he told reporters after the game. “They were superior to us from the start. It was a disastrous night for us in which we were clearly inferior.

“There’s not much more to say. PSG did what we expected them to do and produced their best version and we were at our poorest.”

Barcelona have not been eliminated prior to the quarter-final stage of the Champions League since 2007 but the task facing them is enormous.

“It’s extremely difficult for us now but we go back to our stadium and really we need a heroic performance,” the Barcelona boss added. “But why not dream?”