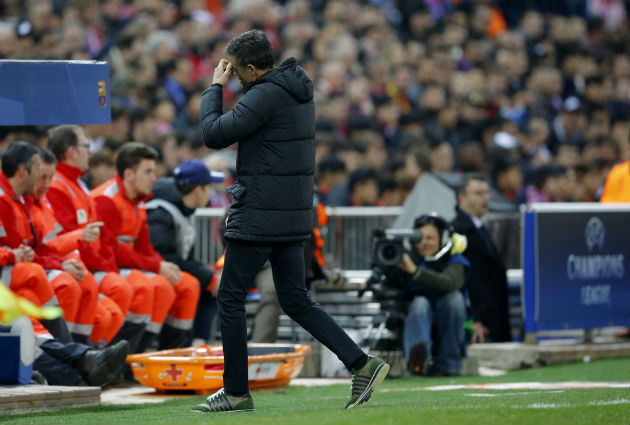 Barcelona’s coach Luis Enrique is confident his side will emerge from their recent slump and retain La Liga title.

The reigning champions still top the standings in Spain but they have have surrendered a nine-point lead over second-placed Atlético Madrid after losing their last three games and are now above them only thanks to a superior head-to-head record. Moreover, their Champions League campaign was ended by the same side at the quarter-final stage last week. Real Madrid, who appeared out of the race just weeks ago, lurk one point behind the leading pair.

However, Luis Enrique sounded a note of defiance before the trip to Deportivo La Coruña on Wednesday.

“I’m convinced we’re going to win the league, if I wasn’t I wouldn’t be sat here,” he said. “I like adversity, that’s how I am. I want to turn this around, win tomorrow and put on a show. I want to delight the fans who are behind us and can’t explain this situation.

The coach, who last year led Barcelona to the treble during his first season in charge, did not offer any explanation for the catastrophic loss of form, which has seen his side go from 39 games unbeaten in all competitions to losing four of their last five matches. The Catalan club is going through its worst run since 2003 when Louis Van Gaal was in charge at Camp Nou.

“We are on a negative run but we don’t need to exaggerate. If it’s due to psychology, then we have the best psychologist around [at the club],” he added.

“We’re clinging on to our players and their attitude and their way of competing. We have had moments like this before, we know how to cope with pressure. But we’re playing against teams that can punish us with few chances.

“If the teams with the best players always won, football would be boring.”

The 45-year-old also refused to apologise to a reporter who had asked him about the team’s fitness levels after Sunday’s 2-1 home defeat by Valencia.