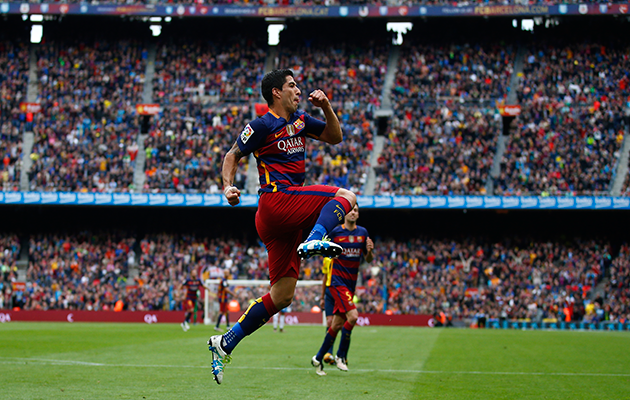 Luis Suarez has claimed that he had the chance to join Real Madrid but opted instead to sign for Barcelona, as he had always dreamt of playing for the Catalan outfit.

The Uruguayan has already secured the Pichichi trophy as Spain’s leading goalscorer with with 40 goals in La Liga, and on Sunday he could collect his second domestic double since his move from Liverpool two seasons ago, as his Barcelona side face Sevilla in the Spanish Cup final.

“Before the World Cup [in 2014], I was asked if there was a chance of me coming [to Barca],” the striker told BeIN Sports.

“Due to my style of play and characteristics, I said it was impossible.

“Getting to Barcelona was the dream I had. There were possibilities to join Madrid, but then Barcelona came in and they were the ones who supported me [after his bite on Giorgio Chiellini].

“From childhood, I’ve always had to overcome things. It’s for this reason that I don’t treat any ball as a lost cause.”

Suarez has formed a potent strike partnership at Camp Nou with fellow forwards Lionel Messi and Neymar, with the trio racking up 130 goals so far this season. He says that their friendship off the pitch helps them work together on it.

“Many believe [the Messi-Neymar-Suarez relationship] is all an act, but it’s a pure friendship because it’s a friendship with zero envy and zero difficulties,” he insisted.

“We get on well, both on and off the pitch. We talk a lot and advise each other a lot, even though it’s difficult to accept advice from others at this level.

“Playing for Barcelona is what I’ve always wanted. I’m alongside the best players in the world, I’ve won the Champions League…

“I’ll be able to tell my children and my grandchildren one day that I played alongside the best player ever [Lionel Messi]. It’s something unique for me.”

Suarez was also quizzed about the fallout from the time he infamously bit Italy defender Giorgio Chiellini at the 2014 World Cup. Despite it being the third such biting incident of his career, Suarez still feels he was harshly treated by Fifa. The forward was given a four-month ban from all football and a nine-match international ban.

“[On the Chiellini bite], what hurts me the most is the way I was treated,” he added.

“It was difficult, I took it as I could, but then I thought I was privileged and put it behind me. I don’t think anyone could’ve done that.”