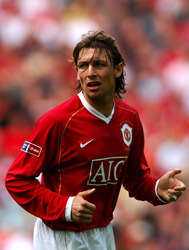 Lyon have confirmed that they may be interested in signing Manchester United’s Argentine left-back Gabriel Heinze.

Heize is at the centre of a transfer dispute as he wants to sign for Liverpool but United do not want to sell to their close rivals.

Perrin said: “He has the profile but it is necessary to know if he really wants to play regularly at centre-back.”

Heinze is taking his dispute to a Premier League arbitration panel on 20 August.

However, United manager Sir Alex Ferguson insists Heinze will be welcomed back by the club should the panel rule in the club’s favour.

“He has not become an alien within the squad,” said Ferguson. “He is a very popular player.

“Obviously, the meeting on 20 August will settle it one way or another.

“But once it is settled, if he is still a Manchester United player, he will be treated accordingly. He is a warrior and a fighter. He won’t let us down.”

Heinze met manager Ferguson at United’s training ground last week to discuss his future, having confirmed he has instructed his lawyers to push through a move to Anfield.

Meanwhile, Ferguson has revealed that he wanted to sign Argentine Carlos Tevez 12 months ago.

“In his year at West Ham, Tevez proved himself to be an absolutely top player,” commented Ferguson, who finally signed the striker this week.

“Every time I saw him playing for West Ham last year, I thought to myself, I just wish we had done it last year.

“But there were too many complications at the time.”