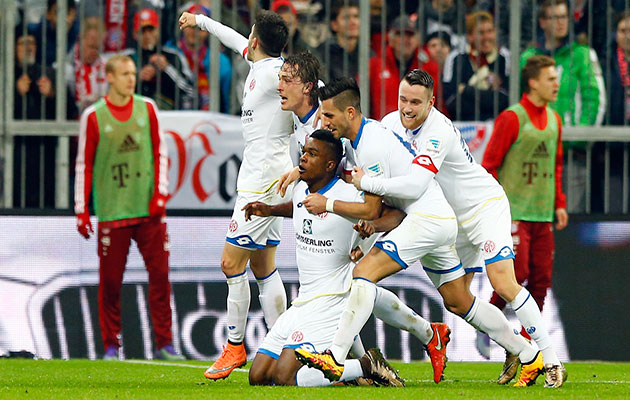 Mainz boss Maetin Schmidt admits he is delighted to have opened up the Bundesliga title race after his team secured a hard fought 2-1 away win at leaders Bayern Munich on Wednesday.

Jhon Cordoba scored the winner for the visitors four minutes from time, with the result coming as second-placed Borussia Dortmund secured a 2-0 win at Darmstadt.

That means that ahead of Dortmund’s and Bayern’s meeting at the Westfalenstadion on Saturday, the gap between the two teams is down to five points.

“I met the boys on Monday morning and we all wanted to take the next step,” Schmidt said. “We only ever talked about winning here.

“We knew that we wouldn’t have all the possession. We had a plan, and we knew it would only come off if we gave it our all. We wanted to write our own chapter today.

“I am pleased that we have made the fight for the title that little bit more interesting.”

After the defeat Bayern now realise they face a battle to retain the title until the end of the season.

“We have been eight points ahead of Dortmund for a long time. That’s not the problem,” Bayern CEO Karl-Heinz Rummenigge told Sport1.

“Maybe one or two players were already thinking ahead to Saturday and believed the job against Mainz was already done. A lot of things went wrong.”

He said Bayern were “not allowed to lose” on Saturday and added: “I hope we can do a better job than today.”