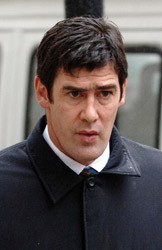 Luton manager Mike Newell has named an agent who he says attempted to bribe him, in the BBC Panorama programme set to be screened on Tuesday.

Newell told in the BBC Panorama programme, set to be screened on Tuesday, that freelance football agent Charles Collymore offered him a cut of a player’s fee that he tried to negotiate.

The BBC Panorama programme comes just weeks before former Metropolitan police commissioner Lord Stevens is due to reveal his findings of an official inquiry into bungs in English football.

Collymore denies offering or accepting any bungs during transfer dealings. The agent, who was secretly filmed for the programme, said he was aware of eight Premiership managers who would accept bungs.

But Newell, meanwhile, claimed bungs to managers as part of transfer deals, were accepted on a regular basis.

Newell said: “I think it’s become a culture in football and it’s almost accepted and brushed under the carpet.”

The programme will also show football agent Charles Collymore being secretly filmed telling investigators that “six to eight managers” who would be “definitely up for a bung” and he names managers and clubs.

Collymore says: “There are managers out there who take bungs all day long. I would say to you comfortably there’s six to eight managers we could definitely approach and they’d be up for this, no problem.”

However, when quizzed about his allegations, Collymore retracted his comments.

“A third-party introduction led to a meeting with a Mr Knut Auf dem Berge. I became suspicious of his alleged claim to be a front man for an investor. In seeking to uncover his true identity and the validity of his claim, I made some wholly untrue statements to determine his real agenda,” he said.

“I can categorically state that I have never offered nor accepted a ‘bung’, to or from anyone.”