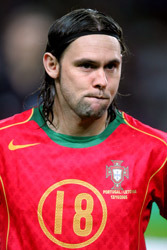 Portugal midfielder Maniche is to undergo a medical with Chelsea as his move to Stamford Bridge looks set to be completed.

The 28-year-old midfielder, currently playing for Dynamo Moscow, is expected to join Chelsea on loan until the end of the season.

Chelsea manager Jose Mourinho has indicated that Maniche could be Chelsea’s only signing in January.

“We will sign nobody or one player in the window,” said Mourinho. “If we sign one player he will be a midfield player.”

Mourinho’s desire to bolster his midfield came after Michael Essien’s injury during the Blues’ 3-1 win over West Ham on Monday.

“We have Essien suspended and injured and we lose Geremi to the African Nations Cup,” added Mourinho. “He is also a solution in midfield.”

Maniche is keen for the move to go through as he looks to curtail an unhappy spell in Russia.

He said: “I have had offers from other big European teams but once Chelsea became interested there was only one team.”

Maniche has already played under Chelsea manager Mourinho when at Benfica and Porto.

“Mourinho is the key to me signing – he has been after me for some time. He is my maestro. He knows me from my time at Porto and Benfica.

“I would be crazy to turn them down, because of the manager and because I have known some of the players there for years.”

If Maniche proves a success at Stamford Bridge, Chelsea could make the move permanent in the summer for £5m.