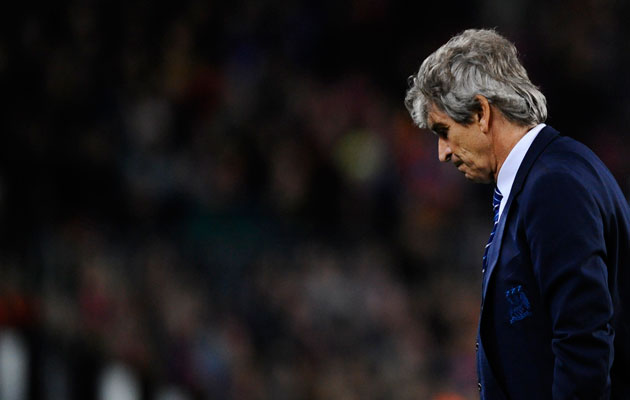 Manuel Pellegrini says he has no concerns over his position as Manchester City’s manager, despite them being eliminated from the Champions League by Barcelona at the last-16 stage for a second successive season.

The Premier League champions were undone by an Ivan Rakitic goal in Camp Nou to lose 3-1 on aggregate to the Spanish league leaders. In truth, though, were it not for a valiant performance by Manchester City goalkeeper, Joe Hart, combined with some profligate finishing by the hosts, the margin of defeat would have been much greater.

Inevitably, given this defeat, allied to a faltering defence of their Premier League title, there has been speculation about the future of the Chilean.

Asked if he could be certain of still being City’s manager next season, Pellegrini replied: “At the end of the season we’ll see what we analyse [and what] is the future but I don’t have any problems or am worried about that. Maybe it is not the moment to try to explain different things.

“It’s very important for this team to try to win something every year. But I don’t think it is absolutely necessary to think that you [have to] improve because there are a lot of things that you must analyse in the right moment. I repeat, last season was a very good season.”

Pellegrini also highlighted the Financial Fair Play penalties that have limited City to a net £49m transfer spend this season.Although, that figure should be placed in the context of City’s extravagant expenditure in the preceding years.

“This year we have just some important restrictions especially to bring important players, we didn’t reinforce our squad so good as much as other teams,” added the manager.

On the continuing speculation about his job, and his plans for rebuilding the squad, Pellegrini was non-committal.

“It’s not a distraction,” he said of his own position. “We will see about that in the right moment. I don’t see it as a failure – it is a disappointment but we have reached the last 16 twice.

“We were unlucky to play Barça on both occasions – we have had a big restriction on our squad size and money, but we have to admit Barça were a better team.”

In the light of City’s recent form, Pellegrini’s faith in the board’s patience does appear somewhat misplaced. Not least when one remembers his predecessor, Roberto Mancini, expresssing similar confidence shortly before he was sacked.