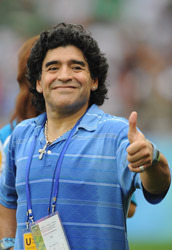 It is seventeen games and counting since Spurs last beat their rivals Arsenal, so can new boss Harry Redknapp wipe that bad run out tonight?

Diego Maradona is expected to be appointed the next coach of the Argentina national side within the next seven days.

Maradona revealed on Tuesday that he was set to succeed Alfio Basile, who stepped down following the World Cup qualifying defeat to Chile earlier this month.

And Argentina Football Association (AFA) secretary Luis Segura has now confirmed that talks with the 1986 World Cup winner have been scheduled for next week.

“The appointment will be official when the AFA’s committee approves it,” said Segura.

“And the next meeting is scheduled for next Tuesday.

“I believe there will not be any more meetings with the other candidates.”

Maradona has little coaching experience, having been in charge of Deportivo Mandiyu for two months in 1994 and Racing Club for four months in 1995.

But he is looking forward to the challenge of leading Argentina, currently third in the South American qualifying group, to the 2010 World Cup.

“As soon as it is confirmed, I will start working, but I can say I am very proud.

“I’m putting everything aside for this. There is nothing that can make me look past the national team.

“Today my path is the national team, my task is to talk to the players and build a solid group.

“I am sure the guys and Argentinian football will pull through.

“I think we must make the players understand that our shirt is the most important thing, that they cannot exchange money for glory.

“Glory is much more than money. I know they know that, but we must make them remember that every day.

“We have enough quality to calm the nation. The road to the World Cup is not easy, but I believe in the Argentinian players.”

Earlier, Maradona told Radio La Red: “My first job will be watching the players. I’ll try to talk to them one by one and then work at the training camp in Ezeiza with them.

“I arrived from Georgia at 10am and three hours later I was having a shower to meet Julio (Grondona). As I was going to the meeting, I thought it was some kind of hidden camera (show).

“The direction Julio wants for the national team is the same Bilardo and I have.

“My job will be watching the players and picking up the ones who are in the best form.”

“Diego will be the next coach of the national team,” said Bilardo.

It is seventeen games and counting since Spurs last beat their rivals Arsenal, so can new boss Harry Redknapp wipe that bad run out tonight?