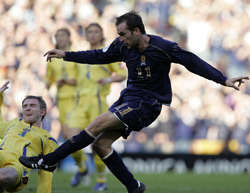 James McFadden believes that feels Scotland are on the verge of reaching the Euro 2008 following their 3-1 win against Ukraine at Hampden Park on Saturday.

The striker enhanced his reputation at international by scoring the decisive third goal to keep Scotland top of Group B with two games remaining.

The Everton forward feels Scotland are now firmly in control of their own destiny as they look to qualify for their first major finals sicne the 1998 World Cup.

“It’s in our own hands now,” McFadden told uefa.com.

“It was before this game and even more so now. If we get four points from our next two games [against Georgia and Italy] we are going to the [UEFA] European Championship and that’s a fantastic incentive for all the players.”

The victory over Ukraine meant that Scotland have now won six consecutive games for the first time in 58 years – a riun which has instilled belief into the Scottish squad.

“On our day we can beat anybody and we are very hard to beat,” he said.

“We’ve got some very good players, players who are very under-rated. We are confident going into every game, but we’re not getting carried away. We have two cup finals coming up, but if we play as we have been playing we have nothing to fear.”

The victory against the Ukraine came at a cost with Lee McCulloch and Garry O’Connor both suspended for Wednesday’s match in Georgia, while a number of other players including captain Barry Ferguson and Scott Brow are also carrying knocks. However, Darren Fletcher has recovered from a knee injury and looks set to start.

“We have a confidence and belief in ourselves and there’s no reason why we can’t go to Georgia and get a result,” said McFadden, who saw a massive print of his wonder goal against France last month unveiled at Hampden Park’s football museum earlier this week.

“We have a few knocks to deal with but that’s international football and with so much at stake I’m sure the boys will play through the pain barrier if they have to.

“Darren coming back in is a great boost as he gives us more quality in midfield, but as I said we are confident going into every game and hopefully we can gat another win on Wednesday.”