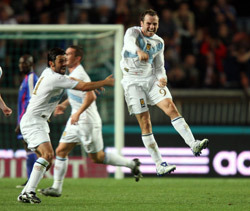 Chelsea v Blackburn; Chelsea won this fixture against Blackburn 3-0 last season and a repeat can be backed at BestPrice 8/1. Click here to view all odds!

“I’m very proud of the players. It’s great they get a reward for all their hard work.

“They showed commitment, passion – everything in abundance. That match gives me one of the greatest nights of my football life.”

Scotland are now two points clear of France at the top of Group B after beating them home and away.

“My players showed a great deal of confidence, we needed something special, we knew that a win would be hard to get,” added McLeish.

“We gave the Scottish fans something to celebrate and I’m glad that my players stood up against a very good French team.

“We have all made a nation very, very happy. I think this goal is one of the greatest and most important for Scottish football.”

The victory means that Scotland are guaranteed to qualify if they take seven points from their remaining games against the Ukraine, Georgia and Italy.

“If we win all three, France are out of it [winning the group] but we know they are going to be very difficult games,” McLeish said. “What gives me hope is that the players showed fantastic confidence when they crossed the white line tonight.

“We played the French team very well and we made it very difficult for them to penetrate our defence. Yes, we had one or two scares, but generally we coped with them very well.

“To have taken anything from this game would have been a bonus but I don’t think anybody in world football would have expected this – except us.

“I’ve always believed in us,” said the Scots boss.

“Now I don’t think France are out of the way and, as far as we are concerned, the challenge is still there for Scotland.

“We are facing three important and difficult games. There is still a lot of work to achieve. We are not qualified yet.”

McLeish reserved special praise for James McFadden, the scorer of the goal.

“We needed something special because it was very difficult to get into the last third of the pitch in great numbers,” McLeish added.

“I saw it all the way and it was a magnificent strike, but that’s what special players do. James is such a great striker of the ball, and so accurate, why should we be so surprised when he scores a goal like that? It was one of the greatest ever Scotland goals, and one of the most important, too.”

But France coach Raymond Domenech was left frustrated by his team’s performance.

“I think we were overall better than in our first leg against Scotland, we controlled the match better but we did not have that little spark of success,” said Domenech.

“We are very unhappy to have lost, this is not a comfortable situation for us.

“We did all we could, the players cannot be blamed for the loss. Sometimes, no matter how hard you try, it just does no work.”

Chelsea v Blackburn; Chelsea won this fixture against Blackburn 3-0 last season and a repeat can be backed at BestPrice 8/1. Click here to view all odds!