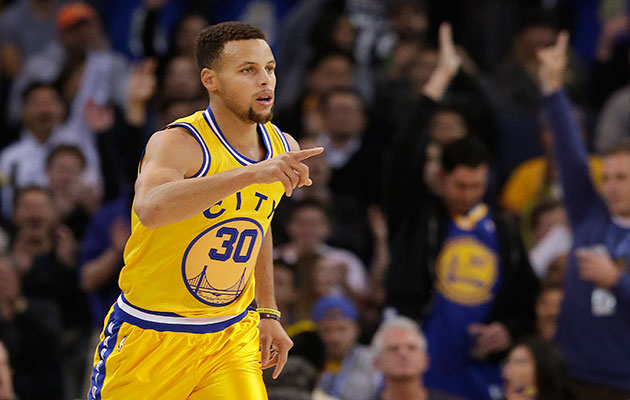 Golden State Warriors have set a new NBA record by winning their first 16 matches of the season and at the heart of their attack is the new golden boy of basketball Stephen Curry.

To mark the historic achievement, the Golden State Warrior was interviewed by the NBA’S Mike Perrelli. During the course of the conversation attention turned to football and how the 27-year-old felt being about being compared to the likes of Cristiano Ronaldo and Lionel Messi.

Was Curry, Perrelli asked, the Messi of the NBA right now or was Messi the Steph Curry of football?

“I don’t know – it’s like a chicken or the egg kind of conversation,” Curry replied. “We both have a creative style, where it’s just about a feel when you’re out on the pitch or the court.

“I try to do some fancy things out there with both hands, making crossover moves and kind of having a certain creativity and flair to my game. And that’s definitely the style that Messi has when he’s out there in his matches.

“I love watching him play. I’m a big fan. And to see just a guy that you never know what he’s going to do at any particular moment – when he’s on TV, everybody is glued in because, as soon as he gets a touch with the ball, something special could happen. And you’ve got to appreciate that kind of talent.”

If you’re not a fan of the NBA, then here’s a glimpse of Curry’s extravagant talents.

And as a point of comparison, here are some of Messi’s finest goals.