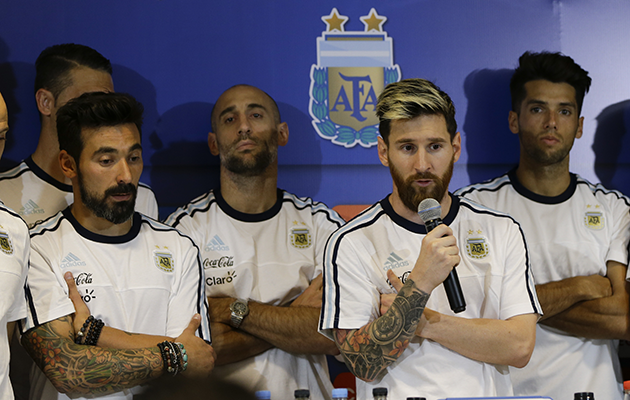 Lionel Messi led a media boycott by the Argentina national team following the 3-0 win against Colombia, and stated the players would not speak to the media after it was alleged that Ezequiel Lavezzi had been dropped for smoking cannabis.

Lavezzi was left out of the squad for the Colombia match and reporter Gabriel Anello suggested on Twitter that he may have been dropped because he was caught smoking cannabis at the team’s training camp.

“Lavezzi is left off the substitutes’ bench tomorrow because of the joint that was smoked last night in the camp? I’m asking… just asking.” Anello said on Twitter.

Following the accusations, the Hebei China Fortune striker says he will take legal action against the reporter.

Meanwhile, after the match, Messi led all 23 players into the press conference where he spoke about the squad’s unhappiness with the media treatment since last week’s 3-0 defeat to Brazil.

“We’re here to let you know that we will no longer be communicating with the press,” Messi said.

“The accusations that were made towards Lavezzi were huge. We regret that it has to be this way but we have no other choice. We know that many of you don’t play that game.

“We were accused a lot. No respect was being shown and we never said anything. But this accusation against Lavezzi was it. If we don’t stop it today, we’ll never stop it. We know that you will continue to criticize us, that’s fine. However, some got into our personal lives.

“We wanted to say this in front of everyone and not release a statement. We didn’t want to hide from anyone. These past two weeks were filled with personal aggression, not football criticism. You can criticize us for winning or losing, but when you get personal we will draw the line.”

Argentina’s win over Colombia moved them up to fifth place and back into qualifying contention.

The top four in the South America group move straight into the finals, while fifth place qualifies for an intercontinental play-off.