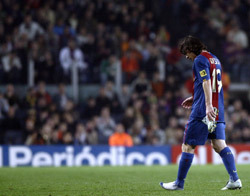 Barcelona’s Lionel Messi faces a lengthy spell on the sidelines after limping off during the 3-1 win over Real Zaragoza with a serious foot injury.

The Argentine international sustained the foot injury had to leave the pitch in the first half and Barcelona’s medical staff have confirmed that Messi had broken the fifth metatarsal in his left foot.

“Messi has broken the fifth metatarsal in his left foot. He will need surgery and the estimated time out will be around three months,” Barcelona said on their Web site on Monday.

The injury is expected to keep Messi out for at least three months and means he will miss the remainder of Barca’s UEFA Champions League Group A campaign. He will also be unable to compete in December’s World Club Cup in Japan.

The news is a huge blow for Barcelona, as they are already without Samuel Eto’o until the New Year because of injury.

The Spanish champions have been linked with a move for a new striker in January to cover for the absence of Eto’o and Messi, with Newcastle’s out of sorts striker Albert Luque a possible target.

Barcelona sport director Txiqui Beguiristain was giving nothing away when it came to identifying potential signings, claiming the club’s board will look at their options.

“The coach and the club will study targets and after that, we will decide something,” said Beguiristain

Brazilian midfielder Edmilson is another casualty after collecting an ankle injury against Zaragoza and is expected to be out for around 10 days.