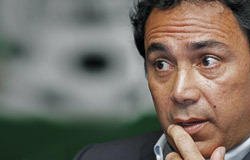 Man Utd and Roma met at this stage of the Champions League last season, when the Red Devils saw off the Italians 8-3 on aggregate – Tues 19:45. Click here for the latest match odds!

Hugo Sanchez has been fired as Mexico coach after only 16 months in the job, the Mexico Football Federation (FMF) has confirmed.

The former Real Madrid striker was sacked two weeks after the under-23 team, which he also coaches, failed to qualify for the Beijing Olympics.

The FMF said the decision had been taken by a meeting of the federation’s executive committee, which is made up of the presidents of the 18 first division clubs.

“By a unanimous decision, the contractual relationship with the technical staff of the national team has been ended,” FMF general secretary Decio de Maria told a news conference.

De Maria said that Jesus Ramirez, who coached the Mexico team which won the World Under-17 championship in Peru in 2005, would take over on a caretaker basis for next month’s friendly against China in the United States.

Sanchez, appointed in November 2006, was in charge for 23 full internationals, winning 12, drawing three and losing eight. However, it was his failure to reach Beijing that brought about his downfall. Mexico were knocked out in the first stage of the CONCACAF qualifying tournament after finishing third behind Canada and Guatemala in their group.

With Mexico’s beginning their qualifying campaign for the 2010 World Cup in just three months time, FMF president Justino Compean said he did not want to risk any more failures.

“We want winners and leaders, we cannot accept another failure,” he said. “If you thought this was difficult, can you imagine Mexico not being in South Africa.”

Man Utd and Roma met at this stage of the Champions League last season, when the Red Devils saw off the Italians 8-3 on aggregate – Tues 19:45. Click here for the latest match odds!