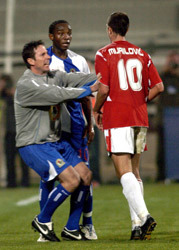 No Premiership side has conceded fewer goals than Arsenal this season. Click here for our BestPrice odds on their weekend game against Everton!

Wisla Krakow defender Nikola Mijailovic has been banned for five matches after he was found guilty of racially abusing Blackburn striker Benni McCarthy.

The Serbian was found guilty by Uefa following the sides meting on 19 October.

The 24-year-old was charged after evidence was submitted by Blackburn, the FA and match referee Stefan Johannesson.

Mijailovic, who denied the allegations, has until Monday to appeal.

“Firstly, we appreciate Uefa’s speed in dealing with this important issue,” said a statement on Blackburn’s website.

“Secondly, we believe that Uefa’s decision sends out a clear message that racism will not, and should not, be tolerated in the game.”

Piara Powar, a spokesman for anti-racism campaigners Kick It Out, told the BBC: “A ban for five matches is strong stuff and very welcome.

“It is the sort of sanction that people across Europe will think, ‘There is a message to be learned here’.

“The concern in the past has been that many incidents have gone unpunished.

“It is time we were able to demonstrate that racism is being challenged in European football.

“Uefa are doing a lot of work in this field and this guy (Mijailovic) has been nailed in the right way.

“It seems that Blackburn and other officials were able to produce eye-witness evidence, allowing action to be taken.”

McCarthy complained during and after the game about the comments being made by Mijailovic.

“Benni was upset by a number of personal comments directed at him by one of their players,” Blackburn boss Mark Hughes said last week.

“It happened right throughout the game. Benni, to his credit, did not react to them and he highlighted the issue to a number of Krakow players and the referee at half-time.

“The situation still developed and there were more comments at the end of the game.”

No Premiership side has conceded fewer goals than Arsenal this season. Click here for our BestPrice odds on their weekend game against Everton!