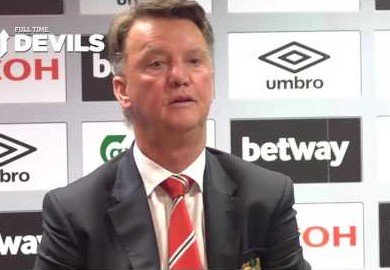 Manchester Utd manager Louis van Gaal lamented his side’s missed opportunity to seize on rivals Manchester City’s loss of form in the race for Champions League after they lost to West Ham in the last game at the Boleyn ground.

In a night that was full of drama and marred by scenes before the game on Man Utd’s team bus, West Ham came back from 2-1 down to grab an emotional victory via a Winston Reid goal.

Even though Van Gaal was disappointed with his side’s loss, he said the race for the top four was still far from over.

“It is the same story, we don’t have it in our hands but it is still possible, we can still catch Manchester City because they have to beat Swansea and that’s not so easy for them,” Van Gaal told Sky Sports.

“Bournemouth (on Sunday) is also not easy because we have to cope with this big disappointment. When you are 1-0 behind and you change it to 2-1 and then lose again it’s a mental blow.

“Of course this is a missed opportunity, you could imagine how thrilled the players and fans and the coach also would have been in this situation. We have to cope with it and at the end we lost 3-2 so we have missed an opportunity.”

The Utd manager was also unhappy at his team’s failure to deal with set-plays again.

“We gave set-plays away which they could score from and we had difficulties with set plays,” he added.

“We knew that in advance and, despite being 2-1 ahead, we couldn’t managed that. We gave too many fouls away near the 60 meters and that was our problem.”