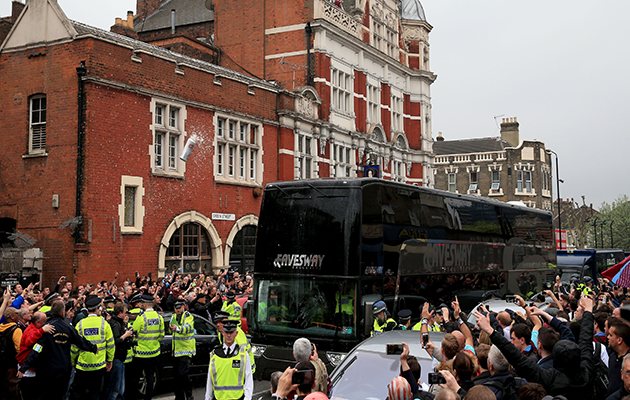 West Ham have promised to hand out life bans to any fan involved in the trouble that marred their final match at Upton Park.

The visiting Manchester United team bus was hit by bottles and cans before the game and a bottle was thrown at their goalkeeper, David de Gea, during the 3-2 victory for the home team.

“We have already had thousands of tweets and emails from fans to say how proud they were to be a part of such a special evening in West Ham’s history. However, we are aware that there were some supporters outside the Boleyn Ground who didn’t act in an appropriate way when the Manchester United team bus was damaged.

“That was not acceptable and we will work with the police to identify those responsible and ban them for life.”

That statement came in stark contrast to the initial reaction of the club’s co-chairman, David Sullivan, who said the police had been “kind” to the visitors by agreeing to delay the kick-off by 45 minutes.

“It is depressing really,” he told BBC Radio 5 Live. “It will be a late night for our fans and some of them won’t be able to stay. I don’t understand why United couldn’t get here at 4pm. They could have got here early. They knew it would be busy. It’s crazy.

“There was congestion in the street and they couldn’t get the coach in. There were people around the coach, but there was no attack on the coach.

“If you check the coach there won’t be any damage to it. If we arrived late at Old Trafford they wouldn’t put the kick-off back.”

United forward Jesse Lingard filmed the attack, though, contrary to the reports claiming the United players were cowering in fear, most of them seem to find the incident quite amusing.

Afterwards, Louis Van Van Gaal refused to blame the incident for his team’s defeat, though looking at United’s first half performance, most of the players did appear shellshocked.

The loss means that United remain in fifth spot and must defeat Bournemouth on their final league game on Sunday and hope that rivals Manchester City drop points against Swansea, to claim a place in next season’s Champions League.