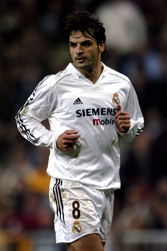 Fernando Morientes is expected to miss both legs of Valencia’s UEFA Champions League clash with Chelsea after damaging his shoulder injury whilst playing for Spain.

Spain’s team doctor Genaro Borras has confirmed that Morientes is likely to be sidelined for up to a month, meaning he will be absent when Valencia visit Stamford Bridge for the first leg of the quarter-final tie on 4th April.

“The shoulder will have to be immobilised for 15 days and he will be out between three to four weeks,” said Borras.

“It is not the first time Morientes has had a problem with the shoulder.”

Morientes has scored five goals in the UEFA Champions League so far this season, and his loss is a huge blow to an already depleted Valencia side.

“This is bad fortune for me because this round against The Blues is very important for Valencia,” Morientes told Spanish radio.

“Now I only hope to recover quickly to help the team.”