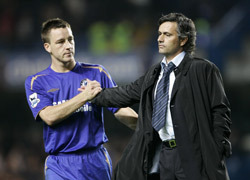 “We normally score a goal and if we score a goal we have got a big chance of reaching the final,” said Mourinho.

“I’m happy with the players. I thought our performance was top class. We had so many chances and we finally scored with chance number six.

“I think Liverpool think they can overturn the result but we are winning 1-0 and have a good defensive team.

“The second half was different from the first, when we had so many chances. Liverpool attacked more and had a chance with a great shot from Steven Gerrard and great save by Petr Cech.”

Mourinho was disappointed Chelsea were not awarded a second-half penalty when Liverpool’s Alvaro Arbeloa handled.

“I don’t understand why we don’t have penalties when they are so clear,” he continued.

“I hope after the second leg we are not crying again about a big decision, like two years ago. I hope we do enough not to look back.”

Meanwhile, Liverpool boss Rafael Benitez believes the tie is far from over.

He said: “You need to score just one and if we can score two we’ll be there.

“We’ll have the support of our people, they know they are really important for us and I hope we’ll feel the atmosphere behind us.”

Liverpool improved after the break after initially struggling to stem the flow of Chelsea attacks.

“The game was made up of two different parts,” added Benitez.

“The first-half we were not controlling it at all, but the second was a little bit better.

“In the second leg we have to be mindful that Chelsea like to counterattack.