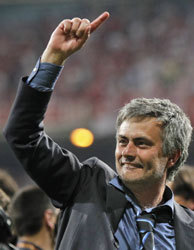 Jose Mourinho’s appointment as Real Madrid manager is not imminent, with the Portuguese coach’s current employer, Inter president Massimo Moratti, saying a deal is still some way off.

After winning the Champions League with a 2-0 win over Bayern Munich at the weekend, Mourinho spoke of his mission to manage Real Madrid and is widely expected to be named the new coach of the Spanish side.

But Manuel Pellegrini remains in charge at the Bernabeu and Moratti, who is already reconciled to finding a replacement, says talks are yet to get underway between the two clubs.

When asked if Mourinho’s move had been agreed, Moratti told the club’s official website: “No. Not even close, actually quite the opposite. We haven’t even started (to discuss it). We will need a bit more time.

“I don’t feel fooled [by Mourinho’s desire to join Real]. The annoyance was overcome as Mourinho’s concentration remained the same and he achieved all the aims that he had to achieve. But the annoying part comes now, with the damage of having to find someone new.”