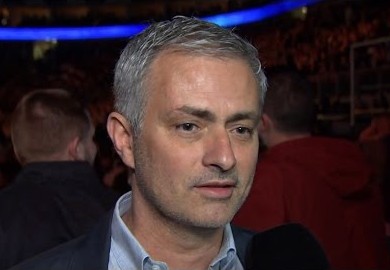 Jose Mourinho has said that he will almost certainly return to management in the summer but crucially said that he has not been in any contact with Manchester Utd.

Current Utd manager Louis Van Gaal is under increasing pressure after his side lost 3-0 to Tottenham yesterday which has damaged Utd’s aspirations to qualify for the Champions League, and Mourinho has constantly been linked with a move to Old Trafford.

Mourinho responded to questions asked about his future from Sky Sports, but said that his preference is to stay in England but had not been in contact with any clubs.

He said: “[Van Gaal] is my friend, I worked with him for a few years.

“I am always linked with jobs and in the summer I will have a job, but in this moment I can promise you I do not have a contract with any club.

“I have to be honest, if possible I would prefer a club but I must analyse to see what is best for my career and to be back with everything I have.

“I would prefer [to be in England]. I love the country, I love the football here, my family is very stable and happy.

“If possible yes, it would be my first choice.”