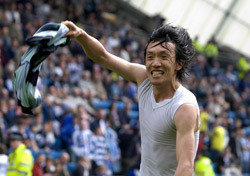 Celtic’s Japanese midfielder, Shunsuke Nakamura, says he is feeling old at 28 and pondering a transfer.

“Celtic are a great team,” said Nakamura whose two free-kicks in a 2-1 win over Kilmarnock at home on Sunday sealed anotehr title for the Glasgow club.

“We have a coach with solid ideas and our supporters are wonderful.

“If I were young, I’d want to stay at Celtic a little longer and then play in Spain before returning to Japan at last. But I’m getting old,” Nakamura said, according to Nikkei.

“I want to focus on the remaining matches now and I want to take my time in the off season and think about a transfer.”

Nakamura was voted the Player of the Year by the Scottish Professional Footballers’ Association hours after Celtic’s title triumph and also won the Goal of the Season honour.

The former J-League Yokohama Marinos star was the first Japanese to win a top playing award in any European league.

His remarks will come as a susprise to the Celtic hierarchy, as he told the club’s website: “I’ll definitely be at Celtic Park next season, hopefully to lift my third championship in a row.”

“It has been a good season, playing well in the Champions League and we’ve won the league again. Now our aim is to win the Scottish Cup.”

Nakamura, who has been at Celtic since 2005, told reporters he had not heard about any transfer offers.

“Certainly, I will feel comfortable staying at Celtic next season,” he said. “But, to grow as a player, it may be better for me to put myself in a tougher environment.

“It would be difficult to jump into a new environment when I am over 30. I want to make the best choice by taking into consideration the coach, teammates, the chance of playing and all the other aspects.”