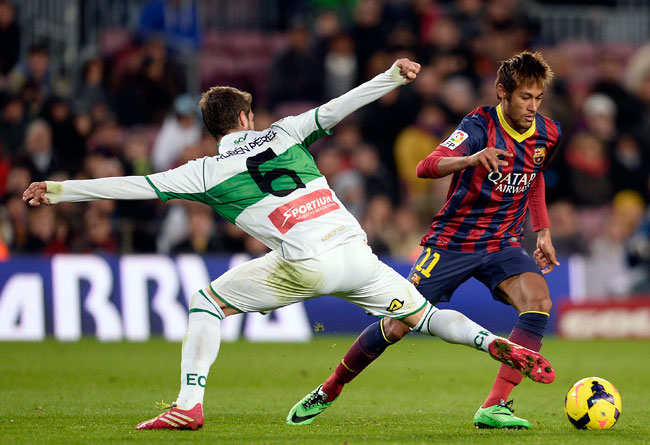 Neymar’s move to Barcelona is currently under investigation by a Spanish judge.

Neymar says there was “nothing illegal” in his transfer to Barcelona from Santos last summer.

That 57 million euro deal is currently being investigated by a Spanish prosecuting judge, amid claims that two different versions of the paperwork exist, and a belief that the deal was structured so that a large chunk of the fee went to Neymar’s father and agent.

The Catalan club itself has firmly denied any wrongdoing, while maintaining that a ‘confidentiality clause’ means it cannot disclose to its own socios (members) exactly what was paid to who.

Which is quite handy when you think about it.

Jordi Cases, a Barcelona member, wrote to the courts claiming that the true beneficiaries of the €40m paid to a company owned by Neymar’s father are unknown, while the public prosecutor has also expressed doubts about the exact amount received by Santos. Barcelona’s president, Sandro Rosell, has been open about the total figures involved but insisted that confidentiality clauses applied to some aspects of the deal.

Cases insists that his complaint is against the club’s president, Sandro Rosell, rather than the club itself and has reiterated that he is not accusing Rosell of benefiting personally from the deal.

The player himself told Sport that his father looked after his business affairs and he was sure everything had been done correctly.

For his sake, let’s hope so.

“I know there has been a lot of talk about my contract,” Neymar said.

“My father signed the contracts and he is obviously a person I have full confidence in. There is nothing illegal. In any case if there is any doubt you can ask my father, because I just focus on my job – which is playing football.”