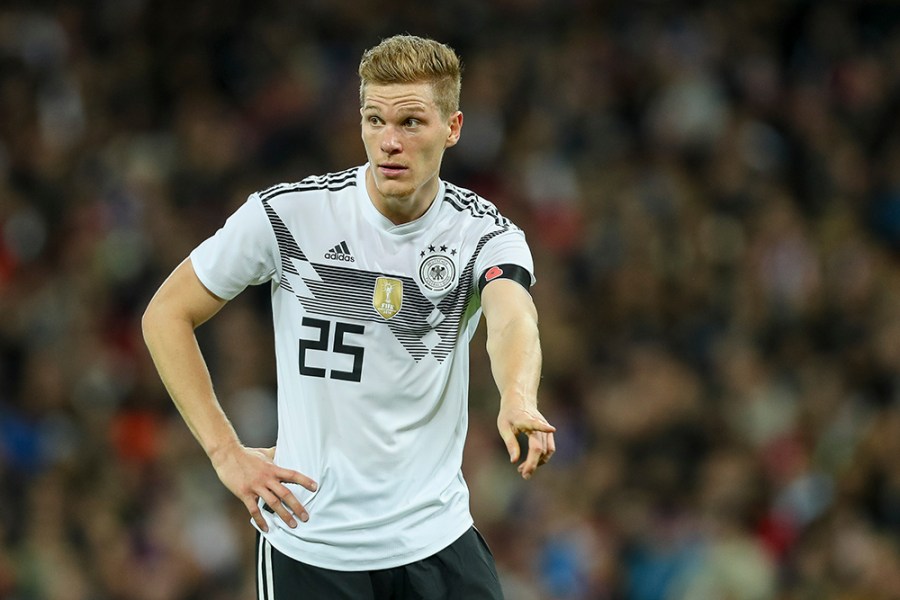 The only new face in the German side which drew 0-0 with England at Wembley, 26-year-old RB Leipzig left-back Marcel Halstenberg clearly is enjoying life as a sporting late bloomer.

Halstenberg, who acquitted himself very well indeed against the Three Lions on the left-side of midfield, only has been playing in the Bundesliga for less than a season-and-a-half and in his formative years was anything but a awe-inspiring prospect, never really setting the pulses racing at hometown club Hannover and unable to make the transition from Dortmund second-string to pro squad.

How ironic that he learnt so much during his two years with Dortmund B (2011-13), picking up good habits at a leading European address, adding tempo and presence to his game and successfully adapting after then reserve boss David Wagner – now Huddersfield Town’s talismanic leader – chose to switch him from central defence to left-back.

The closest he came to pro nirvana at the Westfalenstadion was the occasional appearance on the bench. Yet by no means was he at fault. With Dortmund taking Europe and Germany by storm at the time and the team hierarchy already set in stone, the young, inexperienced Marcel always was likely to be one of the odd men out.

“Of course, I sometimes do wonder why it didn’t work out at Dortmund,” says Halstenberg. “The coach Jürgen Klopp used to explain that it was too early for me. And back then, Dortmund were Bundesliga champions.”

Realising that he would have to look elsewhere for first-team football, Halstenberg completed a switch in the summer of 2013 to second division St Pauli, where he would cut a dash for the next two seasons, eventually securing a 3.5 million euro transfer to the voraciously-ambitious RB Leipzig. Cue all the success he could handle, not least RB’s first-ever promotion to the top-flight in 2015-16 and their amazing second-place finish in last term’s Bundesliga.

Besides Halstenberg’s technical prowess, sense of adventure and gritty competitiveness, he has two other factors working for his Nationalmannschaft future: the experience he has amassed this autumn in the Champions League and a certain lack of nationwide competition in his position. Not one to hide from the obvious, Bundestrainer Joachim Löw often has bemoaned the dearth of high-end German full-backs or wing-backs and in a recent World Cup qualifier against Azerbaijan, tellingly opted for an experimental 3-3-3-1 formation without any wide defenders.

It’s quite possible that Halstenberg will start for Germany at Russia 2018. While Köln’s Jonas Hector, Löw’s usual left-back, never has not let anyone down over the past couple of years, Halstenberg does offer more going forward. Greater dynamism and creativity. Better crossing ability.

“I never had any doubts about my ability to play in the Bundesliga,” says the red-headed Leipziger. “I knew I would make it. It’s been a step-by-step process for me. I swopped the third division with Dortmund for St Pauli in the second. Then had another year in the second tier with RB before going up and straight away becoming vice-champions. I’ve improved constantly and hope to carry in this vein.”

What We’ve Learnt This Week

1. Heynckes to board: dust off the cheque book

Techically, Bayern Munich caretaker boss Jupp Heynckes is only in charge until the end of the season, but that has not stopped him setting out his vision for the club’s transfer market dealings. In an interview with the  Der Welt newspaper, Heynckes called on the board to show more ambition when recruiting. ” A club like Bayern has to be ready, at one time or another, to spend a lot of money on a cracker, ” declared the 72-year-old. Penny for the thoughts of Bayern president Uli Hoeness, who despite being a close friend of Jupp’s, frequently has voiced his unwillingness to sanction spectacular big-money purchases.

Hans Schäfer, one of Germany’s all-time great footballers, has passed away at the grand old age of 90. A member of the West German side which sensationally beat hot favourites Hungary in the 1954 World Cup, the highly-skilled winger or inside-forward, was a proud one-club man at Köln, appearing in 394 league games for the Billy-Goats between 1948 and 1965 and skippering them to the Bundesliga title in 1963-64, the first edition of the competition. Now that Schäfer is no more, Horst Eckel is the sole survivor of that 1954 World Cup-winning team.