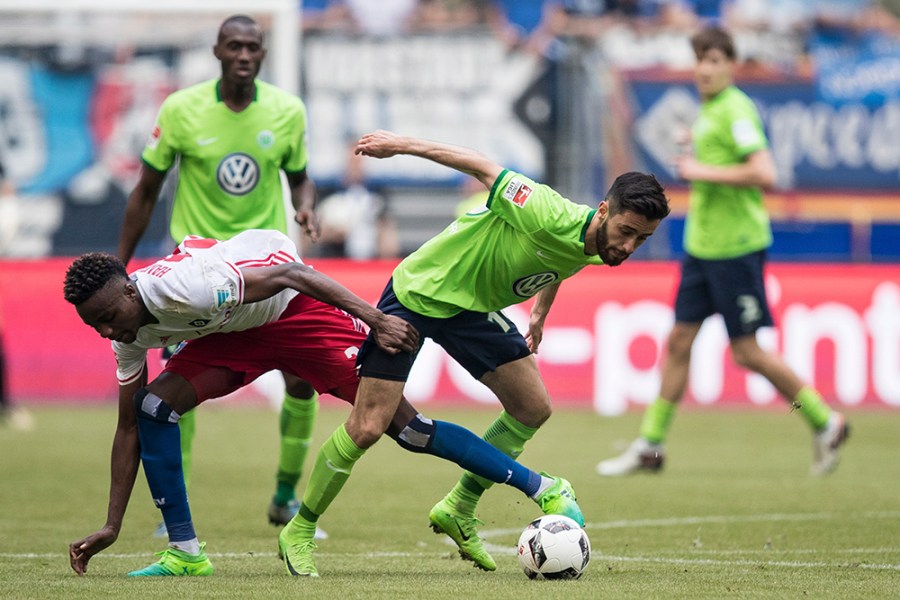 How are the mighty fallen. A little more than a year after basking in the warm glow of victory over Real Madrid in a Champions League quarter-final first-leg, Wolfsburg now have to steel themselves for an altogether different challenge – remaining unscathed in the forthcoming relegation/promotion play-offs.
In the German system, the 16th team in the Bundesliga goes head to head with the second tier bronze medalists and just to add a little more spice to proceedings, this year’s spot of Russian Roulette will be an all-Lower Saxony affair: the Wolves versus arch-rivals Eintracht Braunschweig. Antipathy and bad feeling guaranteed.
German champions in 2008-09 and league runners-up in 2014-15, Wolfsburg’s play-off fate was sealed by a 2-1 loss in Hamburg on the final weekend of the campaign, a relegation showdown from which both sides needed a result to stay up (the hosts having to win, the Wolves requiring only a draw).
For the opening half-hour, everything went according to plan for the Wolfsburger, dominant territorially, carving out the best chances and taking the lead when centre-back Robin Knoche headed in. However then would pay the price of failing to follow through. For sitting back and handing over the initiative.
Within a few minutes, Filip Kostic had equalised for the hosts and two minutes from time, Hamburg’s pressure finally told, substitute Luca Waldschmidt powering home a headed winner. A victory for guts over technique.
Quite a moment for young Waldschmidt. His first-ever goal in the Bundesliga. And just a day after his 21st birthday. “I’ve absolutely no idea how I happened to be on the end of that cross,” gushed the young striker dubbed ‘Lucky Luca’ by the German media. “I’m nor really known for my ability in the air.”
Somewhere up in heaven, there must be a sporting god waving a HSV flag. Despite numerous demotion near-misses, the northerners remain the only founding Bundesliga member never to have been relegated. Time and time again, they flatline, only to miraculously bounce back in the last act or two.
“Ten games into the season, we only had two points in the bag and were as good as dead,” declared an emotionally-drained Hamburg coach Markus Gisdol. “People were writing us off but we pulled together to make history.”
How could Wolfsburg have sunk so low ? Over the past two seasons, they have spent heavily on new players (145 million euros), they offer some of the best salaries in the country and their squad is full of star names, not least Germany centre-forward Mario Gomez, Switzerland full-back, Ricardo Rodriguez, Turkish playmaker Yunus Malli and Brazilian midfield enforcer Luiz Gustavo.
The harsh truth is that the crisis has been building for at least a couple of years. Too many high-price acquisitions who simply failed to deliver (Julian Draxler, Andre Schurrle and Max Kruse); the waning talent-spotting powers of former general manager Klaus Allofs – who was forced out in December – and the chronic instability in the technical area this term, with no fewer than three coaches coming and going (Dieter Hecking, Valerien Ismael and now Andries Jonker).
“As a team we were not up to it and got what we deserved – an extra couple of games,” sighed the free-scoring Gomez, the hit-man responsible for ten of his side’s last 14 goals. “The Hamburg game was a snapshot of our entire season. We alternate between the very good and the miserable.”
What We Learned This Week
1. Auba: always another bullet in the chamber
Twice on the score-sheet in Dortmund’s 4-3 home win over Bremen, African ace Pierre-Emerick Aubameyang finished the season as the Bundesliga’s top scorer, racking up 31 goals in all – one more than Bayern Munich striker Robert Lewandowski. Third in the marksmanship standings was Anthony Modeste of Koln, whose 25 emphatic finishes was the bedrock of his club’s qualification for the Europa League, the Rhinelanders’ first ticket for continental action in 25 years.
2. A darker shade of departure
At the same time as retiring superstars Philipp Lahm and Xabi Alonso, were receiving the Bayern Munich VIP treatment, over in Mainz, club coach Martin Schmidt was experiencing an alternative type of goodbye – what’s commonly called the sack. In charge at the Opel Arena for two-and-a-half years, the Swiss did an awful lot of good work there, notably steering them to a wonderful sixth-place finish in 2015-16. But this term found the going far tougher and with his side only narrowly avoiding relegation, the axe duly fell. Rumour has it that Mainz B coach Sandro Schwarz is in line to take over. Also being touted for the job is ex-Mainz defender Marco Rose, who currently is enjoying much success with the Salzburg youth team.