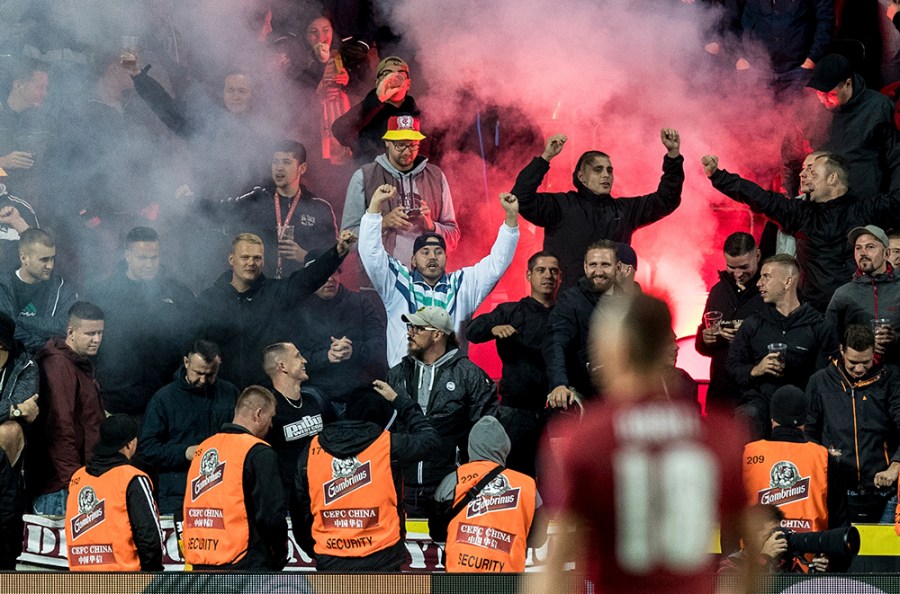 Nationalmannschaft players and officials were left embarrassed and raging after a hardcore group of extremist fans put on a show of shameful behaviour during the 2-1 World Cup qualifying win over the Czech Republic in Prague.
Clearly there to provoke and offend, the so-called ‘supporters’ went through the anti-social repertoire: chanting and jeering throughout a minute’s silence for two recently-deceased Czech football administrators; whistling the opposition national anthem; aiming insults at the DFB (the German federation) and performing some of the Nazis’ Greatest Hits.
The ne’er-do-well brigade also had plenty of invective for young Germany front-man Timo Werner, who since diving to win a penalty for RB Leipzig last year has become a figure of real hate on Bundesliga terraces. All credit to Werner for not allowing the abuse to distract him; he was on the spot to give his side the lead only four minutes into the game and invariably looked the part with his sharpness and fine running off the ball.
On the final whistle, the Germans make a point of enthusiastically communing with their followers. This time, though, they chose to walk straight off the pitch. ” What happened was so wrong,” declared centre-back Mats Hummels, whose late header sealed the victory. “There was never even a question of us going to the stands.
“The chants were terrible, a catastrophe. We completely distance ourselves from that. We don’t want to have anything to do with it. I’m sorry for those who didn’t chant anything. We don’t need this sort of nonsense at our games. They are hooligans. They are not football fans. We have to make sure these people are removed from grounds.”
In a statement DFB president Reinhard Grindel was equally keen to clean house. “We certainly appreciate those who back our side peacefully. Yet never will we tolerate fascist, racist, offensive or homophobic slogans. Together – team, fans and federation – we have to oppose these troublemakers. We say to them – we are not your team.”
The German authorities believe around 200 agitators were at the game, all of whom would have bought their tickets on the black market and not through official DFB channels. Rather than being seated in the away block, they were dotted around in adjoining areas, Relatively free to spread their poison.
For the far-right, football is seen as fertile terrain. Last year Alexander Gauland, the vice-chair of the Alternative for Germany party, sparked outrage when claiming that people would not want coloured German star Jerome Boateng for a neighbour, while a horde of Nazi sympathisers ran amok in Lille at Euro 2016.
As the German players know only too well, there can be no compromise in this particular battle. Zero tolerance is the only way to see off the hate-mongers.
What We Learned This Week
1. If you don’t like these principles, we have others.
So much for RB Leipzig’s commandment that they only recruit players aged 24 or under. On transfer deadline day, the Roten Bullen took many by surprise by committing heresy, bringing in 26-year-old Leverkusen and Slovakia midfielder Kevin Kampl in a 20 million euro deal. Not quite the identikit RB tyro, but still should fit in splendidly with his dynamism, good technique and excellent work in transition. You could say he was keen to move. At RB he will be earning 500,000 euros a year less than in the Rhineland.
2. Pipe him on board.
Very much in need of greater firepower, Leverkusen think they have solved the problem with the 19 million euro acquisition from River Plate of young Argentine striker Lucas Alario. With three senior caps to his name, the 24-year-old has a well-deserved reputation in his homeland for his goalscoring exploits in important matches and was described by Argentina coach Edgardo Bauza as “the future of the national team”. Known as “El Pipa” (The Pipe) because of his nasal features.