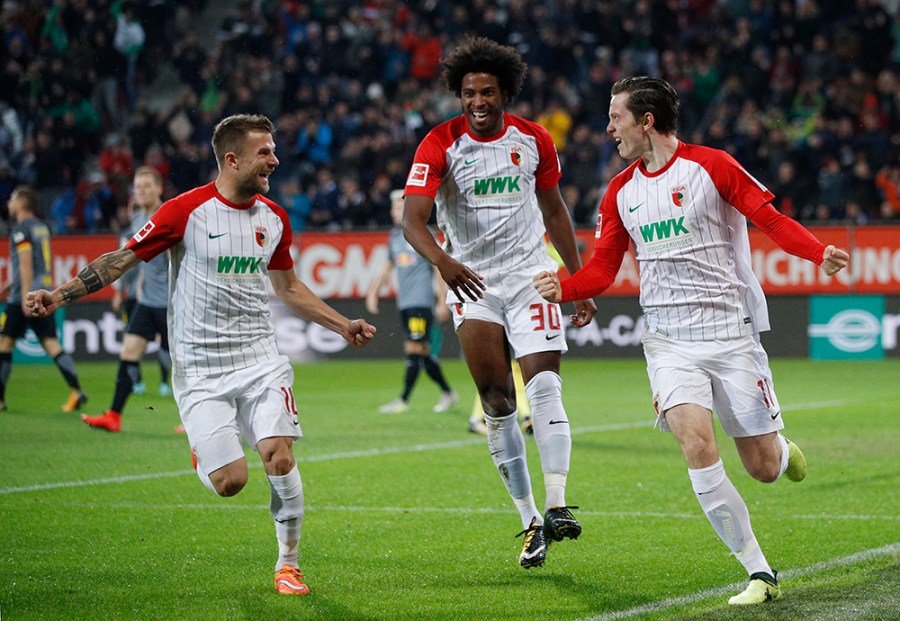 For a team widely-considered to be automatic relegation candidates, to be weeds in the Bundesliga rose garden, FC Augsburg are proving remarkably difficult to uproot.
Rather than vegetating in the lower reaches of the table, FCA have been positively blooming in the early stages of this season, losing only one of their first six fixtures and even managing to record a fine 1-0 home win over last term’s runners up RB Leipzig. Never before have the Swabians started a top-flight campaign so promisingly. Hence the copious amounts of confidence and ambition in the camp.
“Apart from the four or five leading teams, the Bundesliga is extremely evenly-matched and if we can put a good run together, qualification for the Europa League is very much possible,” says FCA’s Icelandic striker Alfred Finnbogason. “We’ve still a long way to go, but why shouldn’t we think about European competition. We’re a young and hungry team. We’re showing that on the pitch.”
Amazing how quickly the mood at the WWK Arena has gone from sullen to upbeat. Following the departure this summer of three of their most influential players  – right-back and captain Paul Verhaegh, top scorer Halil Altintop and midfield dynamo Dominik Kohr – the fans there had every right to be worried. But in no time at all, a new clutch of heroes has emerged, not least the free-scoring Finnbogason, attacking left-back Philipp Max and a trio of new signings: ex-RB Leipzig defensive midfielder Rani Khedira (the brother of German international Sami), deep-lying forward Michael Gregoritsch (ex-Hamburg) and former Darmstadt winger Marcel Heller.
At the heart of the Augsburg philosophy is simplicity. Coach Manuel Baum, in charge since December 2016, makes it a point of principle not to over-burden his players with instructions and essentially sticks to a meat and potatoes dish of uncompromising defending, unbreakable team spirit and rapid counter-attacks.
Instant shape-shifting is an art which comes easily to FCA. One moment circling the 5-3-2 or 5-4-1 wagons. Then winning the ball back and hurtling forward at pace in a 3-4-3.The Brazilian wide-out Caiuby and Heller are especially speedy and if not blocked at source, can cause untold damage.
Baum’s side also has an uncanny ability to put the opposition off their stride, to force them into errors they normally would not make. ” They are nasty but successful with it, ” declared Eintracht Frankfurt director of sport Fredi Bobic after seeing his charges lose 2-1 to FCA.
While Augsburg boast the second smallest personnel budget in the league (35 million euros), they ironically maintain a massive squad, with no fewer than 33 pros on the books. Manuel Baum loves nothing better to shuffle his first-team pack and has all the manpower he possibly could need, including four keepers, seven centre-backs and eight wide-men.
“Everyone here knows that week-on-week they have to earn the right to start,” says Baum. “Nor do we have to fret about injury niggles. We’ve the resources to react.”
What We Learned This Week
1. Ole Alario.
Leverkusen’s new Argentine goleador Lucas Alario, enjoyed a dream debut in the 3-0 home victory against Hamburg, scoring with his first shot on goal and making another for strike-partner Kevin Volland. Alario, brought in from River Plate in a 19 million euro deal, only knows a few words of German, but clearly had no problem communicating with his ‘Werkself’ teammates. “We had to use sign language but understood each other well enough,” explained Volland.
2. Read my lips
Hertha Berlin skipper Vedad Ibisevic has demanded that lip-reading experts be consulted after being sent off for foul and abusive language in the 1-0 loss in Mainz. Match referee Tobias Stieler insists he was verbally abused by the Bosnian centre-forward. Ibisevic claims he was misheard. The tabloid Bild already have a lip-reader on the case and she apparently has conformed Ibisevic’s story.