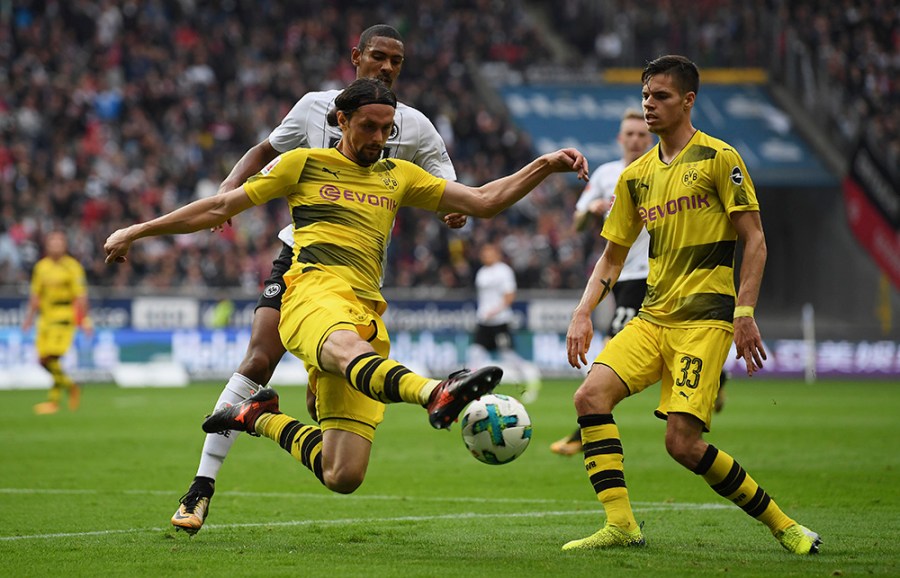 Known to watch endless reruns of his team’s matches, Dortmund coach Peter Bosz definitely will not be enjoying those analytical sessions at the moment.
After starting the 2017-18 season with all guns blazing – winning six of their first seven Bundesliga fixtures and scoring no fewer than 21 goals – the Schwarz-Gelben suddenly have turned fallible, losing a 3-2 thriller at home to RB Leipzig, then throwing away a two-goal lead in a 2-2 draw in Frankfurt.
In a little more than a week, Bosz’s side has gone from five points clear at the top of the table to level-pegging with Bayern Munich and just to further dampen the Westfalen spirits, their boys are struggling in the Champions League too.
Following defeats to Tottenham and Real Madrid and a 1-1 draw in Cyprus against APOEL, the Dortmunder have next to no chance of qualifying for the next round and only have themselves to blame. Too defensively naive to keep the North Londoners and Galacticos at bay. Too complacent and lethargic to see off a well-organised but individually inferior APOEL
At the heart of Dortmund’s current problems is a singular lack of dual-track effectiveness. Yes BVB are a thrill-a-minute attacking force under Bosz, a whirlwind of vapour-trail sprinters and snappy ball circulation. But that sense of adventure also is their weak spot, habitually overextending themselves and often leaving the back door open.
Thanks to Bosz’s insistence that they maintain a high defensive line, BVB always will be vulnerable to the long ball over the top and what is as clear as day is that their pressing game is far too unfocused. Either indiscriminate or strangely non-existent.
Dortmund are, in many ways, the traffic cop who waves every vehicle through from all directions. Sooner or later, a car crash ensues.
The recent post-match comments of Frankfurt director of sport Fredi Bobic made for interesting reading: “During the first 20 minutes of the second-half (the period in which his side fought back to restore parity) it developed into an all-or-nothing type of game, with no midfield play from either either team. It was a crazy old school match, going back and forth.”
In fairness to Bosz, it’s far too early to condemn him out of hand. Only in the job for a few months, he still needs time to co-ordinate the team’s work off the ball and undeniably has not been helped by factors beyond his control: the lengthy injury list and out-of-form players.
Usually so electrifying, ace marksman Pierre-Emerick Aubameyang, has been going through the motions of late, while Swiss keeper Roman Burki has come in for no end of criticism for a string of mistakes, not least the two near-post goals he conceded against Tottenham and his slapstick efforts versus APOEL.
Burki’s ‘reward’? A new contract to bind him to the club until 2021. “We like his style of play and see great potential for development in him” declared sporting director Michael Zorc. “He was outstanding for us last season and despite the mistakes he’s made, we’re convinced that he’s our keeper for the long-term. He is the perfect fit for us on both a sporting and personal level.”
Never mind the naysayers. We’ll do things our way.
What We Learned This Week
1. Kölner crisis
Still to win a game this season, rock bottom Köln have decided to part ways with director of sport Jörg Schmadtke. In post for the last four years, the former Freiburg keeper was a unconditional supporter of coach Peter Stöger and speculation already is rife that the latter will suffer the same fate. Boasting only two points from a possible 27, the Billy Goats have dug quite a hole for themselves and in recent weeks, many of the fans have been pointing the finger at Schamdtke, accusing him of taking his eye off the ball in the transfer market.
2. Viva Catalunya
According to Catalan sports daily Mundo Deportivo, Barcelona are closely monitoring a pair of RB Leipzig young guns, namely German international striker Timo Werner and French centre-back Dayot Upamecano. The ‘blaugrana’ apparently see the 18-year-old Upamecano as a possible replacement for Gerard Pique, while the speedy and sharp Werner, wanted by a host of top European clubs, most definitely has the wherewithall to cut it at the Camp Nou.