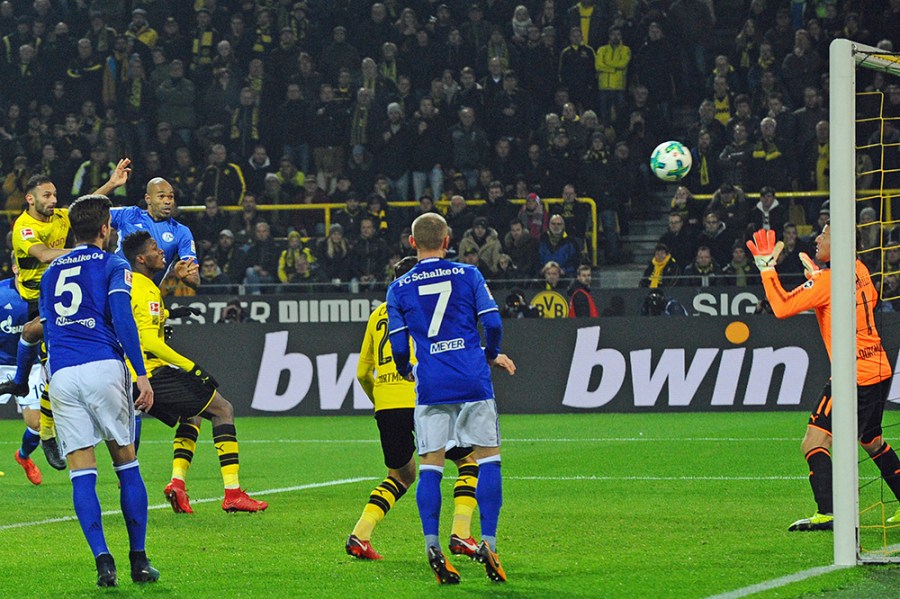 Over the last few weeks, the massed ranks of Dortmund followers have found themselves locked in a bad news loop, force-fed calamity upon calamity. Without a victory in their last six Bundesliga games, tumbling from top of the table to fifth, out of the Champions League and now suffering the mother of all meltdowns in the 4-4 draw at home to Ruhr arch-rivals Schalke.
The 91st ‘Revierderby’ was a classic encounter of barely-concealed antipathy and spectacle. The fever-pitch atmosphere at the Westfalenstadion; a rampant Dortmund going four-nil up after just 25 minutes; Schalke sensationally restoring parity with a flurry of goals in the last half-hour; players from both sides clashing at the final whistle and number of Dortmund fans attempting to storm the pitch.
Enraged by their side’s derby day collapse, Schwarz-Gelben supporters would have another opportunity to vent their spleen at the annual conference of club members, which as ill-luck would have it, took place less than 24 hours after the Schalke debacle.
While the normal drill is for the pro squad to attend and be suitably feted, this year’s event was anything but a friendly meet-and-greet, the players and coach Peter Bosz sheepishly filing into the hall to a chorus of boos and catcalls. No mistaking the message from the floor: “You let us down. You’re on notice.”
Speculation had been rife that the much-criticised Bosz was about to be sent packing. But for the moment at least, CEO Hans-Joachim Watzke seems to be holding his fire, keen to give his coach one more chance to turn the situation around.
Watzke only sacked Bosz’s predecessor (Thomas Tuchel) in June and does not want to be seen as a boss who easily panics, who prefers a string of emergency ward coaches to continuity. Bosz stays for now, but with conditions.
“I have the clear expectation, Peter, that you and your team will, in the following days, put everything to the test and leave no stone unturned,” said Watzke in his address to the membership. “There should be no issues which are off limits. Then we will critically but constructively make a judgement call. We must quickly get back to winning ways. Qualification for the Champions League remains our number one objective.
“We can emerge stronger from these difficulties. In the Bundesliga we are only three points worse off than this time last season. We’re still within striking distance of the best-placed teams, but have to learn the necessary lessons.”
And as far as Bosz is concerned, that means the teaching of one all-important module – the art of solid defending. How not to be sucker-punched on the break, how to cover and shore up in midfield and above all, how to deal with high balls into box.
To keep his job, Bosz simply will have to rethink his formula. A little less attacking gung-ho. A lot more steel and watchfulness to the rear.
What We Learned This Week
1. Bayern are only human.
After nine straight wins in all competitions, caretaker Bayern boss Jupp Heynckes finally has tasted defeat, his team slipping to a 2-1 Bundesliga loss at his old Borussia Mönchengladbach stomping ground. During Bayern’s recent AGM, club president Uli Hoeness hinted that Jupp might want to stay on for another season. Heynckes, though, says no: “We’ve an agreement which runs until the end of June next year and that’s that.”
2. Rangnick: the end of the Premier League dream ?
Rumoured to be on the shortlist of a number of top English managerial vacancies, RB Leipzig director of sport Ralf Rangnick has opted to commit his future to the Saxons, extending his contract with them until 2021. “He is the motor of our football club and absolutely fundamental to our future development,” declared RB chief executive Oliver Mintzlaff. Shame. The 59-year-old could have been a sensation in England, with tactical genius and eye for talent.