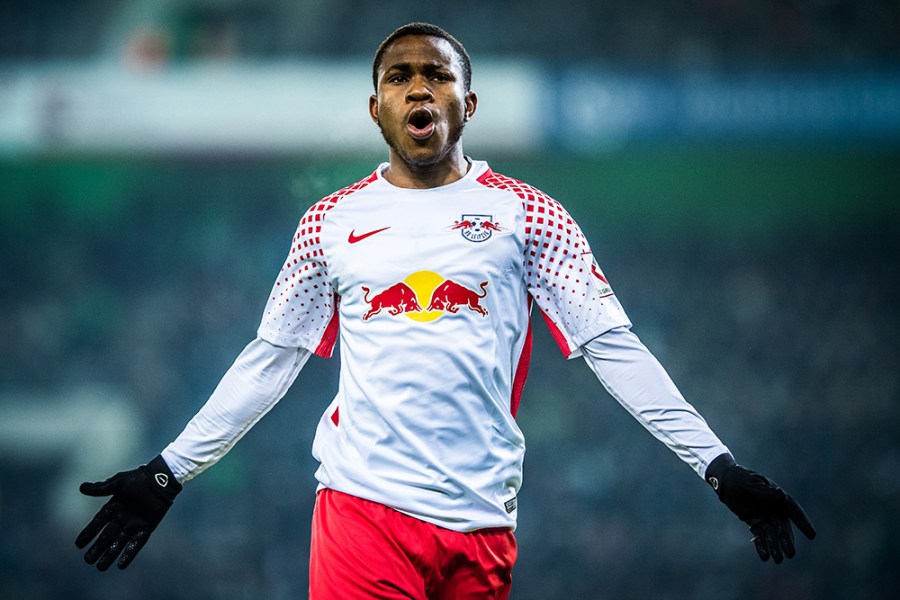 Pleased to meet you. Acquired on a six-month loan deal from Everton, Young England winger Ademola Lookman was at pains to keep the introductions short and sweet on his debut for RB Leipzig, needing just ten minutes as a substitute to fire in a wonderful winner at Gladbach.

Not bad at all for a youngster who only had trained a couple times with his new RB teammates and was struggling with his choice of footwear.

“He only brought one pair of boots with him from England and was slipping around a lot,” explained RB coach Ralph Hasenhüttl. “He was lucky – and so was I – that I kept him out there. The way he took his goal was exactly what I had hoped to see him do. He has so much quality in one-on-on play and straight away proved it for us. ”

Everton boss Sam Allardyce was far from pleased to see Lookman head to Saxony, complaining of the youngster’s “stubborness” in forcing through the deadline day move. But who can, in all honestly, blame the London-born starlet ?

In marked contrast to Everton’s apparent disregard for him – starting him only once in the Premier League this season – the palpably-ambitious Leipziger will at least show faith in him. Once again in contention for a Champions League berth, RB have carved out a niche for themselves as Young Gun FC and apparently began  monitoring Lookman a couple of years ago when he was with Charlton.

Not that everything is going to according to plan for RB at the moment. The win at Gladbach was only their second victory in eight Bundesliga games, left-back Marcel Halstenberg will miss the rest of the season with damaged cruciate ligaments, while key attacking midfielder Emil Forsberg has been sidelined with a groin problem.

From the ‘Roten Bullen’ corridors of power, rumblings of discontent can be heard. After failing to sign a replacement for Halstenberg in the recent transfer window, director of sport Ralf Rangnick blamed the scouting department for an alleged lack of preparedness and the latter also has been pointing the finger at club academy coaches, criticising them for not supplying enough talent for the first-team.

“In an emergency situation, we’d like to be able to call on one or two players from the youth ranks to join the senior squad,” said Rangnick. “But we’re not in a position to. Our Under 19 side is the worst we’ve had in six years.”

What We’ve Learned This Week

Following Stuttgart’s decision to sack coach Hannes Wolf, the Swabians have handed the first-team reins to former club midfielder Tayfun Korkut, who was the caretaker boss at Leverkusen last spring and also has taken charge of Hannover and second division Kaiserslautern.The former Turkish international was not a success in any of those jobs and needless to say the mood on the Mercedes-Benz Arena terraces is grim.

Making a concerted charge for Europa League qualification, Augsburg have terminated the contract of Ghanaian right-back Daniel Opare. The 27-year-old spent much of the January transfer window trying to engineer a move away, secretly holding talks with other clubs, one of whom was Schalke. ” Daniel Opare repeatedly and consciously lied to us, ” stormed FCA sporting director Stefan Reuter. ” Time and again, he’s broken our internal code of conduct. ”